SPORTSNET: Bob Murray resigned last night as general manager of the Anaheim Ducks and intends to enter a treatment program for alcohol abuse. This news comes a day after Murray, 66, was placed on administrative leave by the club amid an independent investigation into his workplace conduct. 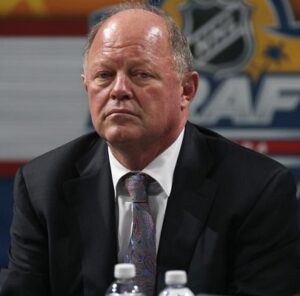 The club hasn’t released details of the investigation but an anonymous source said it was prompted by complaints of verbal abuse by Murray toward team employees. Team owners Henry and Susan Samueli will pay for his treatment program.

Jeff Solomon, who recently joined the Ducks front office, replaces Murray on an interim basis. He will be in charge of finding a full-time replacement.

SPECTOR’S NOTE: Give credit to the Ducks organization for taking swift action when complaints about Murray were made via the league’s hotline to report abusive behavior. It’s indicative of the culture change underway in the NHL in the wake of the Chicago Blackhawks’ sexual assault scandal.

It appears Murray’s behavior was exacerbated by alcohol but that doesn’t excuse his alleged treatment of his subordinates. His NHL career is probably over but he’ll hopefully learn from this experience, get the proper treatment he needs for his alcohol abuse and becomes a better person going forward.

NHL.COM: Jack Campbell made 36 saves and William Nylander scored twice as the Toronto Maple Leafs blanked the Philadelphia Flyers 3-0. It’s the first time a Leafs goalie has shut out the Flyers since Ed Belfour did it on Nov. 29, 2002. Toronto captain John Tavares was a late scratch with a lower-body injury and is listed as day-to-day.

The Nashville Predators are 6-1-1 in their last eight games after a 4-2 victory over the Dallas Stars. Predators goalie Juuse Saros kicked out 25 shots while teammate Tanner Jeannot had a goal and an assist. Stars forward Roope Hintz picked up his first goal of the season.

Minnesota Wild winger Kevin Fiala had a goal and two assists as his club dropped the Arizona Coyotes 5-2. The Wild have won four straight to improve their record to 9-3-0. Shayne Gostisbehere had a goal and an assist for the sad-sack Coyotes, who sit 1-11-1 on the season.

OTTAWA SUN: The Senators are battling a COVID-19 outbreak that has sidelined six players and led to the second day of canceled practice as Canadian Tire Centre was closed to the public. The league is monitoring the situation and hopes to avoid rescheduling games if at all possible but maintains its top concern is the health of everyone in the dressing room.

SPECTOR’S NOTE: The league might not have much choice but to reschedule some of the Senators games if the case numbers keep growing. The Sens are scheduled to face the Los Angeles Kings tonight at the CTC.

THE DENVER POST: Colorado Avalanche center Nathan MacKinnon is expected to miss around three weeks with a lower-body injury. Injuries have depleted the Avs roster this season, contributing to their 4-5-1 start.

CALGARY SUN: Flames winger Andrew Mangiapane was surprised to learn he’s on Team Canada’s 50-player long list of players who could make up their 25-man roster for the 2022 Beijing Winter Olympics. The list won’t be publicly revealed but Mangiapane confirmed he’s on it.

SPECTOR’S NOTE: Mangiapane is worthy of consideration. He’s steadily developed into a reliable top-six forward for the Flames and played a crucial role in Canada winning gold at the 2021 World Championships. He currently has eight goals and 10 points in 12 games this season.

DAILY FACEOFF: Leo Komarov’s nine-season NHL career is coming to a close. The New York Islanders are expected to place him on unconditional waivers today to terminate his contract. He will then join KHL club SKA St. Petersburg. In 491 games, Komarov had 63 goals and 170 points but saw action in just one game this season with the Isles.

TAMPA BAY TIMES: Lightning defenseman Erik Cernak is out indefinitely with an apparent injury to his left arm suffered during their overtime loss to the Carolina Hurricanes on Tuesday.