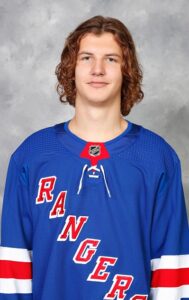 The 21-year-old right wing is in Russia awaiting a trade after refusing to report to the New York Rangers AHL affiliate in Hartford last month. The Rangers loaned him to KHL club Traktor Chelyabinsk.

SPECTOR’S NOTE: There were conflicting reports out of New York regarding Kravtsov’s decision. Some claimed he’s had a difficult relationship with Rangers general manager Chris Drury stretching back to their tenures in Hartford in 2019-20. Others said the former first-round pick (ninth overall, 2018) felt he’d never get an opportunity to crack the Blueshirts’ top six given their depth on the wings.

Whatever the reason, Kravtsov apparently made up his mind he doesn’t want to play for the Rangers but recent reports suggest he hasn’t ruled out returning to the Blueshirts. Loaning him to Chelyabinsk gives him the opportunity to remain in game shape. It also enables teams interested in the youngster to evaluate his performance.

No surprise the Canadiens and Senators are interested. Both teams are struggling and could use some scoring depth. The Habs have the league’s second-lowest goals-per-game average (2.00) while the Senators (2.50) are 28th overall.

THE ATHLETIC: In her latest mailbag segment, Los Angeles Kings beat writer Lisa Dillman if there’s a player the club could target to acquire before placing Drew Doughty on long-term injury reserve. She believes the Kings aren’t targeting players for trades right now because Doughty is expected to return around Christmas. November tends to be a quiet time in the NHL trade market as teams still sort out what they have.

With the Kings in the thick of the playoff race and sidelined players like Doughty and Viktor Arvidsson due back soon, she doesn’t expect they’ll be involved in much trade activity right now.

Asked where Gabe Vilardi fits into the Kings lineup, Dillman said she isn’t sure given the Kings depth at center. She suggested he might benefit from playing with a team that lacks depth at that position.

SPECTOR’S NOTE: Kings GM Rob Blake wants to see improvement out of his roster this season. They had a wobbly start but have won six straight and are jockeying with San Jose and Nashville for a wild-card berth.

Blake could become a buyer in the new year if the Kings remain a playoff contender by the February Olympic break. If so, maybe he uses draft picks and/or prospects to bring in a rental player or two. He could also use Vilardi as trade bait to add a more established player. The 22-year-old center is in the final season of his entry-level deal and could interest a club seeking depth at center or a team looking to rebuild.

← NHL Morning Coffee Headlines - November 11, 2021 NHL Morning Coffee Headlines - November 12, 2021 →
We use cookies on our website to give you the most relevant experience by remembering your preferences and repeat visits. By clicking “Accept”, you consent to the use of ALL the cookies.
Do not sell my personal information.
Cookie SettingsAccept
Manage consent