​Should the fading Canadiens start shopping players like Brendan Gallagher or Ben Chiarot? Are the Rangers and Panthers in the market for a forward? Check out the latest in today’s NHL trade rumors.

SHOULD THE CANADIENS SHOP GALLAGHER OR CHIAROT?

TVA SPORTS: Anthony Martineau and Nicolas Cloutier weighed in on which Montreal Canadiens players they’d attempt to trade if they were the general manager. 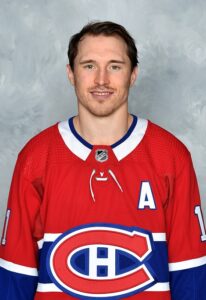 Martineau suggested shopping Brendan Gallagher. He felt the 29-year-old winger’s $6.25 million cap hit through 2026-27 could become burdensome for the Canadiens over the long term. The reporter also accused the hard-working winger of selfish play, saying the last few times Gallagher got angry was over missing an empty net, or at teammate Alexander Romanov for too intense coverage in a recent practice or sucker-punching New York Rangers forward Barclay Goodrow.

Nevertheless, Martineau feels Gallagher’s reputation for hard work would make him enticing for some clubs. He thinks the Canadiens would have to retain part of the winger’s salary but it would be worthwhile to make room on the roster and salary cap for younger players to build around.

Cloutier, meanwhile, suggested packaging defenseman Ben Chiarot with versatile forward Joel Armia for a first-round pick and a prospect. He considers them big players built for postseason hockey who could help a contender to reach another level. When asked who would replace them on the Canadiens roster, Cloutier proposed Jesse Ylonen and one of their many left-shot prospects in their system.

SPECTOR’S NOTE: Gallagher has definitely lost much of the spark that made him effective as an agitating, heart-and-soul top-six winger. Perhaps playing for a better club will rekindle that fire.

The Canadiens would have to retain part of Gallagher’s cap hit if they don’t want to take back a big contract in return. He also has a six-team trade list and a no-movement clause that prevents him from being demoted to the minors.

Some might chuckle at Cloutier’s suggestion of Chiarot and Armia fetching a first-rounder and a prospect. However, Sportsnet’s Elliotte Friedman believes Chiarot alone could land a first-round pick. “He’s playoff-tested, he’s not a high maintenance guy,” said Friedman.

As for the left-side defensemen in the Habs system to replace Chiarot, 2020 first-round pick Kaiden Guhle best fits that description. The earliest he could make his NHL debut is next season as they’ll keep Guhle in Junior hockey for this season.

Bear in mind there’s no indication the Canadiens are about to beat the trade deadline rush and engage in an early firesale of veterans. That likely won’t start until sometime in January leading up to the Olympic break in February. Time will tell if Gallagher, Chiarot and Armia become trade candidates.

LATEST ON THE RANGERS AND PANTHERS

TSN: Darren Dreger reports the New York Rangers have been in the market for a middle-six forward for some time. It can be a third-liner or someone who can skate on the top-six. That search became amplified by Sammy Blais recently suffering a season-ending injury. The trade market is quiet right now but things could pick up around the American Thanksgiving holiday next week.

SPECTOR’S NOTE: The trade market is slow right now with only three deals taking place since the start of the season. The Blueshirts’ search could extend beyond the end of this month.

This would’ve been an ideal opportunity for Vitali Kravtsov. However, he’s now on loan to KHL team Traktor Chelyabinsk and cannot return to the Rangers until the KHL season is over.

Pierre LeBrun reported the Florida Panthers aren’t in the market for a replacement center for sidelined captain Aleksander Barkov. He’s out for three-four weeks with a sprained knee that won’t require surgery. They feel they have the depth to compensate for his absence.

SPECTOR’S NOTE: The Panthers moved Sam Bennett into Barkov’s spot on the first line and rookie Anton Lundell into the second line spot, with the returning Joe Thornton sliding into the third-line center role.

← NHL Morning Coffee Headlines - November 19, 2021 NHL Morning Coffee Headlines - November 20, 2021 →
We use cookies on our website to give you the most relevant experience by remembering your preferences and repeat visits. By clicking “Accept”, you consent to the use of ALL the cookies.
Do not sell my personal information.
Cookie SettingsAccept
Manage consent