Sam Reinhart burns his former club in a comeback victory, the Stars and Wild remain red hot, an update on Jack Eichel, the Coyotes deny a relocation rumor and more in today’s NHL morning coffee headlines.

NHL.COM: The Florida Panthers scored six unanswered goals to overcome a 4-1 deficit and defeat the Buffalo Sabres 7-4. Panthers forward Sam Reinhart burned his former club with a goal and three assists, Jonathan Huberdeau had a goal and four assists and Aaron Ekblad and Anton Lundell each scored twice. Sabres forward Vinnie Hinostroza tallied two goals for the Sabres. The Panthers rallied when Sergei Bobrovsky was replaced by Spencer Knight after giving up four goals on 12 shots. Earlier in the day, the Sabres placed goalie Dustin Tokarski on the COVID protocol list. 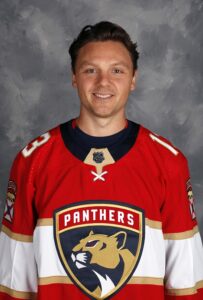 A two-goal performance by Jason Robertson powered the Dallas Stars to a 3-2 win over the Columbus Blue Jackets. Joe Pavelski collected two assists as the red-hot Stars overcame a 2-1 deficit to extend their winning streak to six games. Blue Jackets callup goalie Danill Tarasov made 34 saves with regular netminders Elvis Merzlikins and Joonas Korpisalo both sidelined by non-COVID-related illnesses.

Speaking of red-hot clubs, the Minnesota Wild picked up their fifth straight victory by dropping the New Jersey Devils 5-2. Kirill Kapizov scored twice and added an assist while Ryan Hartman had a goal and two assists. The Devils have lost seven of their last nine games.

The Ottawa Senators snapped a six-game losing skid with a 3-2 upset of the Carolina Hurricanes. Anton Forsberg picked up the win with a career-high 47-save performance while Alex Formenton scored twice for the Senators. The slumping Hurricanes have dropped five of their last six contests.

Calgary Flames netminder Jacob Markstrom kicked out 40 shots in a 3-2 win over the Los Angeles Kings. Flames winger Andrew Mangiapane scored and had an assist. It was Flames coach Darryl Sutter’s first game in Los Angeles since he was fired as Kings coach over four years ago. The Flames are tied with the Wild (33 points) atop the Western Conference. Earlier in the day, the Flames sent defenseman Juuso Valimaki to their AHL affiliate in Stockton.

Patrick Kane scored the only goal in a shootout as the Chicago Blackhawks nipped the Washington Capitals 4-3. Alex DeBrincat and Seth Jones each had a goal and an assist for the Blackhawks, who limited Capitals captain Alex Ovechkin to one assist.

Victor Hedman scored twice and Andrei Vasilevskiy stopped 26 shots as the Tampa Bay Lightning doubled up the St. Louis Blues 4-2. The Blues played without goaltender Jordan Binnington and defenseman Justin Faulk after both were placed on the COVID protocol list.

The New York Islanders remain winless in nine games after dropping a 2-1 decision to the San Jose Sharks. Erik Karlsson tallied the game-winner in overtime.

After getting lit up for eight goals on Wednesday by the Toronto Maple Leafs, the Colorado Avalanche bounced back with a 4-1 win over the Montreal Canadiens. Avalanche defenseman Bowen Byram missed the game dealing with issues related to a previous concussion while goalie Darcy Kuemper remains day-to-day with an upper-body injury. The Canadiens played without Brendan Gallagher and Sami Niku (COVID protocol) and lost winger Josh Anderson for the next two to four weeks with an upper-body injury.

ARIZONA REPUBLIC: The Coyotes issued a statement yesterday denying a report in Forbes claiming the team is up for sale with the idea of the buyer moving the team to a new arena in Houston. “This is false. Totally false. We’re not selling. We’re not moving. The Coyotes are 100 percent committed to playing in Arizona.”

SPECTOR’S NOTE: NHL commissioner Gary Bettman also dismissed the story as “completely false”. The Coyotes have made a bid to build a new arena in Tempe, Arizona. Unless the move to Houston story is some sort of backchannel last resort if the Tempe bid falls through, it makes little sense for the Coyotes ownership to sell the club.

SPECTOR’S NOTE: The Sabres had to do something to shore up their shaky goaltending. We’ll find out soon enough if Subban can provide some relief.

THE HOCKEY NEWS: The Nashville Predators and Tampa Bay Lightning unveiled their third jerseys for their Stadium Series matchup in Nashville on Feb. 26, 2022.