NHL.COM: The New York Rangers retired Henrik Lundqvist’s No. 30 in a pregame ceremony before dropping a 3-2 decision to the Minnesota Wild. Frederick Gaudreau tallied the game-winner as the Wild overcame a 2-0 deficit. Kevin Fiala and Mats Zuccarello each had a goal and an assist for the Wild (55 points), sitting nine points ahead of the Calgary Flames in the first wild-card berth in the Western Conference. The Rangers were without defenseman Adam Fox, who’s been placed on injured reserve with an upper-body injury and could miss next weekend’s NHL All-Star Game. 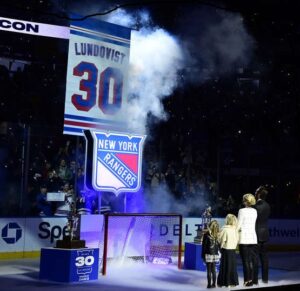 Henrik Lundqvist and his family watch his No. 30 being raised to the rafters at Madison Square Garden (NHL.com).

SPECTOR’S NOTE: Lundqvist becomes the 11th player in Rangers history to have his number retired. He’s their all-time leader among Blueshirts netminders in games-played (887), wins (459), shutouts (64), and save percentage (.918), and is just the fourth Rangers to win the Vezina Trophy (2012). He’s a lock for induction into the Hockey Hall of Fame.

Hall-of-Fame defenseman Sergei Zubov had his No. 56 retired by the Dallas Stars in a pregame ceremony but they went to fall 5-0 to the Washington Capitals. Vitek Vanecek had a 29-save shutout while Nicklas Backstrom had a goal and two assists as the Capitals chased former teammate Braden Holtby from the Stars net after two periods. Washington (57 points) sits four points up on the Boston Bruins in the first Eastern Conference wild-card spot while the Stars (46 points) remain behind the Flames in the Western wild-card race.

SPECTOR’S NOTE: Zubov spent his first four NHL seasons with the Rangers and Pittsburgh Penguins before going on to spend the remaining 12 years of his career with the Stars. He played a key role in their rise as a Stanley Cup contender in the late-1990s and early-2000s, helping them win the Cup in 1999. He’s their all-time leader in goals (111), assists (438) and points (549) among defensemen.

The Colorado Avalanche picked up their ninth straight win by hanging on to defeat the Chicago Blackhawks 6-4. Gabriel Landeskog scored twice and collected an assist while Nazem Kadri had a goal and two assists for the Avs (65 points), who are 14-0-1 through January as they take over first place in the overall standings. Patrick Kane and Brandon Hagel each tallied twice for the Blackhawks.

SPECTOR’S NOTE: Each team was without a key player in this contest. Avalanche center Nathan MacKinnon suffered a facial fracture and a concussion following a hit by Boston Bruins winger Taylor Hall on Wednesday and will be sidelined for the next three games before next week’s All-Star break. Blackhawks captain Jonathan Toews entered concussion protocol as the result of a hit from Detroit Red Wings forward Joe Veleno on Wednesday.

Speaking of the Bruins, they held on to defeat the Arizona Coyotes 2-1. David Pastrnak collected two assists, Linus Ullmark kicked out 30 shots and Charlie McAvoy scored what proved to be the winning goal in the second period. The Bruins played without goalie Tuukka Rask as he’s sidelined with a lower-body injury. With 53 points, they hold a nine-point lead over the Detroit Red Wings for the final Eastern wild-card berth.

As for the Red Wings, they got a 36-save effort from Calvin Pickard and a shootout goal by rookie Lucas Raymond to nip the Pittsburgh Penguins 3-2. Jake Guentzel tallied both goals for the Penguins, who move atop the Metropolitan Division with 61 points.

DAILY FACEOFF: Former NHL executive Chris Gear analyzed how the results of the NHL’s investigation into Evander Kane could affect his grievance with the San Jose Sharks over their termination of his contract. The investigation didn’t find sufficient evidence that Kane violated COVID protocols for traveling to Canada while he was supposed to be isolating following a positive COVID test.

SPECTOR’S NOTE: I recommend reading the entire piece. In a nutshell, Gear expects an arbitrator could rule in Kane’s favor where he received the full remaining entitlement from his terminated contract. The Sharks could face some sort of salary-cap charge but could also get some measure of cap relief as a consequence of his signing with the Oilers. It’ll be interesting to see how this situation plays out.

FLORIDA HOCKEY NOW: The Panthers sent goaltender Spencer Knight to their AHL affiliate after Jonas Johansson cleared COVID protocols. It’s not a demotion but a move to activate some players.

TSN: Tonight’s game between the Seattle Kraken and New York Islanders has been postponed due to a snowstorm in the New York area.