​Check out the latest on Matthew Tkachuk, Tomas Hertl, and Timo Meier plus some suggested backup goalie candidates for the Penguins in today’s NHL rumor mill.

WILL THE FLAMES RE-SIGN TKACHUK AND BOOST THEIR ROSTER?

THE ATHLETIC: Jeremy Rutherford and Hailey Salvian examined the options facing Calgary Flames winger Matthew Tkachuk when he becomes a restricted free agent with arbitration rights this summer. It will cost the Flames $9 million to qualify his rights. He’s also a year away from unrestricted free agent eligibility. 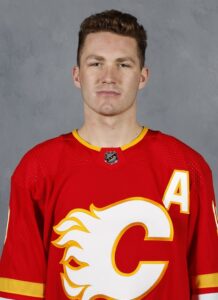 It’s assumed Tkachuk would join the St. Louis Blues (his hometown club) one day if he doesn’t stay with the Flames on a long-term deal. However, sources say he’d also have interest in the Vegas Golden Knights, Dallas Stars, Nashville Predators and New York Rangers to name a few.

CALGARY HOCKEY NOW: Steve Macfarlane believes Flames management should be in “go-for-it” mode given the uncertainty over the futures of Tkachuk and pending UFA winger Johnny Gaudreau.

SPECTOR’S NOTE: Cap Friendly shows the Flames with $50.2 million invested in 11 players for 2022-23. They have sufficient cap space to re-sign Tkachuk and Gaudreau but those moves would quickly eat up around $20 million of it, leaving little room to re-sign Andrew Mangiapane, Oliver Kylington and fill out the remainder of the lineup. It could come down to Tkachuk or Gaudreau depending on how much they’re willing to pay on a long-term deal.

The Flames currently have over $5.5 million in trade deadline cap space so there’s some wiggle room to add to their roster this season. Whether they’ll follow Macfarlane’s advice this season remains to be seen. They’re currently jockeying for the final wild-card spot in the Western Conference and could go from buyers to sellers if they fall further out of contention by the March trade deadline

WHAT’S NEXT FOR THE SHARKS?

THE ATHLETIC: Corey Masisak wondered what the San Jose Sharks will do with defenseman Erik Karlsson sidelined until at least mid-March following surgery on his forearm earlier this week. With a tough stretch of games coming up in their schedule and in a tight battle for the final Western Conference wild-card berth, they’ll have to figure out if they’ll be buyers, sellers or stand pat at the trade deadline.

If the Sharks buy, they could pursue a top-six winger and a defenseman to help their blueline while Karlsson remains sidelined. Selling could mean shopping UFA center Tomas Hertl for a significant return involving draft picks and prospects.

The following day, Masisak’s colleague Eric Duhatschek was asked in a mailbag segment if they would also trade winger Timo Meier if they go into sell mode at the trade deadline. A favorable arbitration ruling in the Evander Kane case could provide the Sharks with sufficient space to sign both to long-term extensions.

With Meier signed through 2022-23 and slated to become an RFA with arbitration rights next summer, Duhatschek believes the Sharks will move heaven and earth to keep him.

SPECTOR’S NOTE: The next month will determine the Sharks’ path leading up to deadline day. Hertl has expressed a willingness to stay and that could be possible if they get significant cap relief from terminating Kane’s contract. If not, they could be forced to part with him at the deadline if they’re out of playoff contention rather than lose him for nothing.

SPECTOR’S NOTE: Johansson could be available. His recent emergence from COVID protocol forced the Panthers to send Spencer Knight to the minors because he’s waiver exempt.

The Sabres’ banged-up goalie corps likely means they’ll hang onto Anderson until some of the others get healthier. I don’t see the Kings parting with Sparks while they’re jockeying for a playoff spot. They’ll want him as insurance in case of injury to Jonathan Quick or Cal Petersen.

There’s speculation the Senators are getting calls from other clubs interested in Forsberg. Perhaps the Penguins are among them. However, they could prefer to hang onto him and attempt to re-sign him to a multi-year deal.

← NHL Morning Coffee Headlines - January 29, 2022 NHL Morning Coffee Headlines - January 30, 2022 →
We use cookies on our website to give you the most relevant experience by remembering your preferences and repeat visits. By clicking “Accept”, you consent to the use of ALL the cookies.
Do not sell my personal information.
Cookie SettingsAccept
Manage consent