​It was a day of hat tricks for the Penguins and Rangers, Nathan MacKinnon extends his points streak, the three stars and rookie of the month for December are revealed, and more in today’s NHL morning coffee headlines.

NHL.COM: The Pittsburgh Penguins picked up their eighth straight win by holding off the San Jose Sharks 8-5. Penguins forwards Evan Rodrigues and Bryan Rust led the way with three goals each as the club played its first game in 13 days due to COVID postponements. Rust also collected two assists to finish the game with five points. Sharks forward Timo Meier picked up three assists while James Reimer got the hook after giving up six goals on 17 shots. 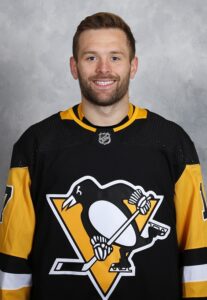 Speaking of hat tricks, Mika Zibanejad tallied three times as the New York Rangers blanked the Tampa Bay Lightning 4-0. Igor Shesterkin made 38 saves for the shutout while Lightning goalie Andre Vasilevskiy gave up four goals on 21 shots in his first game since returning from COVID protocol.

Colorado Avalanche center Nathan MacKinnon extended his points streak to 10 games with three assists in a 4-2 victory over the Anaheim Ducks. Linemate Mikko Rantanen also had three points with a goal and two assists as the Avs played their first game in 16 days. Ducks forward Max Comtois and defenseman Cam Fowler returned to the lineup from recent injuries.

A three-point performance by Johnny Gaudreau (one goal, two assists) powered the Calgary Flames to a 5-1 win over the Chicago Blackhawks. Jacob Markstrom turned aside 30 shots for the Flames.

The Boston Bruins scored five straight goals to beat the Detroit Red Wings 5-1. Charlie McAvoy and Tomas Nosek each had a goal and an assist as the Bruins (34 points) vaulted over the Wings into the final wild-card spot in the Eastern Conference.

The New Jersey Devils blew a 3-1 lead but still managed to upset the Washington Capitals 4-3 on an overtime goal by Nico Hischier. It was Hischier’s second goal of the game as his Devils picked up their third straight victory. The Capitals, however, moved past the Lightning into first place in the Eastern Conference.

The NHL department of player safety suspended Florida Panthers forward Sam Bennett for three games for an illegal hit to the head of Montreal Canadiens forward Cedric Paquette during Saturday’s game between the two clubs.

TSN: Speaking of the Canadiens, their search for a new general manager is reportedly underway. Pierre LeBrun reports they’ve been reaching out to NHL clubs to seek permission to speak with potential candidates. Roberto Luongo, Mathieu Darche and Daniel Briere are believed among the Habs targets.

← Sunday NHL Rumor Roundup - January 2, 2022 NHL Rumor Mill - January 3, 2022 →
We use cookies on our website to give you the most relevant experience by remembering your preferences and repeat visits. By clicking “Accept”, you consent to the use of ALL the cookies.
Do not sell my personal information.
Cookie SettingsAccept
Manage consent