The Rangers move into first place in the overall standings, the three stars of the week are announced, the latest COVID protocols updates, the Flames new arena deal is dead and more in today’s NHL morning coffee headlines.

NHL.COM: The New York Rangers (48 points) moved into first place in the overall standings by dropping the Edmonton Oilers 4-1. Ryan Strome had a goal and two assists, Adam Fox collected two assists, Chris Kreider tallied his 20th goal of the season and Alexandar Georgiev picked up the win with 33 saves. The Oilers (38 points) have only two wins in their last 12 games and are clinging to the final wild-card berth in the Western Conference. 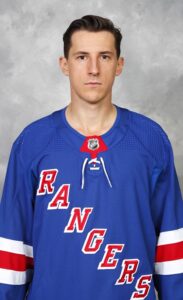 SPECTOR’S NOTE: The total number of players going on or coming off the protocol list changes daily. For example, 10 Dallas Stars players (including Miro Heiskanen, Roope Hintz, Esa Lindell, Jason Robertson and Ryan Suter) were removed from the list yesterday.

Meanwhile, NHL deputy commissioner Bill Daly said he doesn’t expect many more Canadian franchises will have games postponed due to attendance issues because the league is running out of time to make up games already postponed.

SPECTOR’S NOTE: It’s believed the seven Canadian franchises had asked for their home games in January to be rescheduled for later in the season when attendance restrictions in their respective provinces are lifted when the Omicron COVID variant fades. Those clubs will see a significant reduction in their hockey-related revenue (HRR) under the current capacity limitations which will have an adverse effect upon the league’s overall revenue, in turn affecting the salary cap down the road.

NBC SPORTS PHILADELPHIA: Flyers defenseman Ryan Ellis recently started skating after being sidelined for weeks with a lower-body injury. However, there’s still no timetable for his return to action. Acquired last summer from the Nashville Predators, the 31-year-old Ellis appeared in just four games and hasn’t played since Nov. 13.

SPECTOR’S NOTE: Ellis’ absence is one reason why the Flyers are struggling to stay in the hunt for the final wild-card berth in the Eastern Conference.

CBC SPORTS: The City of Calgary’s deal with the owners of the Calgary Flames for a new downtown arena is officially terminated due to “unresolved issues.” It’s estimated the two sides had already spent between $20 million and $25 million on the $600 million project.

SPECTOR’S NOTE: This doesn’t mean the Flames will be relocating to another city. The club’s ownership group indicated it intends to remain in the Saddledome. However, they’ll be looking at investing millions in updating and upgrading the building.