​Two Blackhawks tally hat tricks in a win over the Devils, the Kings’ Jonathan Quick reaches a milestone for US goaltenders, the Avalanche remains dominant in the overall standings and more in today’s NHL morning coffee headlines.

NHL.COM: Patrick Kane and Brandon Hagel each tallied a hat trick as the Chicago Blackhawks beat the New Jersey Devils 8-5 to end a seven-game home losing skid. Alex DeBrincat and Seth Jones each collected three assists for the Blackhawks. Jesper Bratt scored twice while Jack Hughes and Jonas Siegenthaler each had a goal and two assists for the Devils. 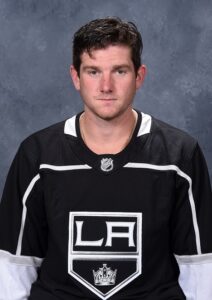 The Los Angeles Kings’ Jonathan Quick stopped 24 shots to become the fourth US-born goaltender to reach the 350 win plateau in a 4-1 victory over the Anaheim Ducks. Adrian Kempe tallied two goals and added an assist as the Kings moved into second place in the Pacific Division with 63 points. The Ducks (59 points) remain just outside the final Western Conference wild-card berth.

Speaking of hat tricks, Gabriel Landeskog scored three goals to lead the Colorado Avalanche over the Winnipeg Jets 6-3. Nathan MacKinnon netted two goals and Mikko Rantanen had three assists as the Avalanche opened a four-point lead over the Carolina Hurricanes in the overall standings with 80 points. The Jets, meanwhile, remain six points out of a wild-card spot in the Western Conference with 59 points.

The Hurricanes, meanwhile, moved into first place in the Eastern Conference with 76 points by blanking the Columbus Blue Jackets 4-0, snapping Jackets winger Patrik Laine’s 11-game points streak. Hurricanes goalie Frederik Andersen made 19 saves for the shutout while Jackets netminder J-F Berube kicked out 46 shots. The Hurricanes sit one point up on the Florida Panthers.

St. Louis Blues winger Jordan Kyrou scored two goals and set up another as his club held off the Buffalo Sabres 5-3. Ivan Barbashev had three helpers and Ville Husso made 35 saves for the Blues as they hold a three-point lead with 68 points over the Minnesota Wild in the Central Division.

The Arizona Coyotes got a 43-save performance by goaltender Scott Wedgewood to upset the Vegas Golden Knights 3-1. Nick Schmaltz’s two unanswered third-period goals sealed the deal for the Coyotes. With 62 points, the Golden Knights have dropped four of their last five contests and slide to third in the Pacific Division.

THE SCORE: Washington Capitals captain Alexander Ovechkin voiced his concern yesterday over the war in Ukraine during a post-practice meeting with reporters. Referencing his family in Russia and friends in Ukraine, he expressed hope for the war to end soon. “Please, no more war,” said Ovechkin. “It doesn’t matter who is in the war – Russia, Ukraine, different countries – I think we live in a world, like, we have to leave in peace and a great world.

Ovechkin, 36, has been an outspoken supporter of Russian President Vladimir Putin. When asked if he still supports Putin, the Capitals captain replied he’s not into politics and hoped the situation would end quickly.

SPECTOR’S NOTE: Ovechkin’s previous support of Putin was going to draw questions from the media (and criticism from some) regarding his opinion on Russia’s invasion of Ukraine. On the other hand, he also has to worry about the well-being of family and close friends back in Russia, a concern likely shared by other Russian NHLers about their own loved ones.

One need only recall what happened to New York Rangers’ left winger Artemi Panarin last season for his outspoken criticism of Putin. A former Russian coach (and Putin supporter) accused Panarin of assaulting a young woman over a decade ago during his tenure in the KHL. The allegations were quickly discredited but Panarin had to take time away from the Rangers to deal with the situation.

MONTREAL GAZETTE: The Canadiens provided an update on the status of sidelined goaltender Carey Price. His off-ice workouts are said to be going well but he’s not expected to return to the ice in the upcoming week. The 34-year-old Price has yet to play this season as he continues to recover from offseason knee surgery.

SPECTOR’S NOTE: Until we hear differently, it appears Price is still hoping to return to action at some point this season. His return won’t save the Canadiens’ season but could help him gauge his performance and the health of his knee for next season.

SPECTOR’S NOTE: Cap Friendly indicates Matheson also carries a $4.875 million cap hit. If he ends up on long-term injury reserve and is out for the season, perhaps the Penguins will use that to bolster their roster leading up to the trade deadline.