​Check out the latest on the Blackhawks, Rangers and Canucks in today’s NHL rumor mill.

NBC SPORTS CHICAGO: Charlie Roumeliotis reports it’s believed the Blackhawks won’t move Marc-Andre Fleury unless he asks to be traded. The 37-year-old goaltender has a 10-team no-trade clause and has surfaced in recent trade rumors, with the latest tying him to his former club, the Vegas Golden Knights. If he does request a trade, they won’t send him somewhere he doesn’t want to go.

Fleury acknowledged if he were to be traded he’d want to play for a Stanley Cup contender. “If…IF…I move, I would love a chance to win,” he said. “That’s what I play for and that’s what I love. It’s still a big if at this point.”

SPECTOR’S NOTE: One reason is there are not many Cup contenders seeking an upgrade between the pipes. The Edmonton Oilers and Washington Capitals could use Fleury but they’re not considered among this season’s Cup favorites. There’s also a report the Capitals attempted to acquire him but it’s rumored he rejected the deal. The remainder of his $7 million cap hit for this season is another sticking point. Fleury could end up finishing this season with the Blackhawks.

THE ATHLETIC: Mark Lazerus reports winger Dominik Kubalik’s struggles this season have him facing an uncertain future with the Blackhawks. The 26-year-old winger is a restricted free agent with arbitration rights but his production is down this season.

CHICAGO SUN-TIMES: Ben Pope acknowledged Seravalli’s report about Hagel but said a source told him the 23-year-old winger is virtually off the table. Fleury and defenseman Calvin de Haan are the Blackhawks’ biggest trade chips. Kubalik and fellow RFA Dylan Strome have been on the market for months despite persuasive arguments for keeping both. 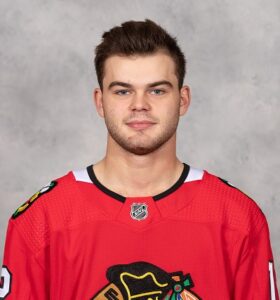 SPECTOR’S NOTE: Davidson might be listening but that doesn’t mean he’s moving DeBrincat or Hagel. Both are young enough to be core players on this rebuilding roster. Unless the gambit here is to piss off long-time leaders Patrick Kane and Jonathan Toews to the point where they demand a trade in the offseason, it makes little sense to move DeBrincat or Hagel unless the return is significant.

It wouldn’t be surprising if Kubalik and Strome are traded away, though the decline in their respective production means they won’t fetch much of a return for the Blackhawks. Given their arbitration rights, it might not be worth the hassle to keep them.

NEW YORK POST: Larry Brooks reports the Rangers interest in Vancouver Canucks forward (and former Ranger) J.T. Miller has been “an open secret” for some time. The versatile Miller can skate at center or right wing. He could prove useful to them beyond this season if they’re unable to re-sign pending UFA center Ryan Strome this summer. However, the Blueshirts probably won’t be able to afford an extension for Miller and would have to seek another top-six center in 2023.

THE ATHLETIC: Arthur Staple reports the asking price for Miller could be the classic “draft pick/prospect/player”. He wondered if the Rangers could land him by pitching a first-round pick and promising defenseman Nils Lundkvist.

Staple also commented on a recent report by Daily Faceoff’s Frank Seravalli saying the Vegas Golden Knights may have reached out to the Rangers about Alexandar Georgiev. However, sources say the Blueshirts haven’t received any real offers yet for the 26-year-old goaltender. He’s slated to become a restricted free agent with arbitration rights this summer and is a year away from UFA eligibility. Parting with Georgiev would leave the Rangers seeking an experienced replacement.

SPECTOR’S NOTE: It’ll be interesting to see what moves Rangers GM Chris Drury makes before the March 21 trade deadline. He’s got plenty of deadline cap space and lots of promising young players/prospects to draw upon for trade bait.

Drury is well-positioned to make a solid bid for Miller but would it be with an eye on keeping him beyond next season or as a short-term measure? Will he pass on Miller and consider other options? We’ll find out soon enough.

I’ll be surprised if they move out Georgiev. He’s not a UFA so they can peddle him in the offseason if he doesn’t fit into their plans. He did a good job filling in for starter Igor Shesterkin when he was sidelined for several games earlier this season. Better to stick with the backup you know down the stretch and into the playoffs.

Rutherford said the final decision to make trades rests with Allvin, who indicated he wants to evaluate his club’s performance as they continue to fight for a playoff spot in the Western Conference.

CHEK-TV’s Rick Dhaliwal cited Elliotte Friedman noted the Canucks interest in New Jersey Devils forward Pavel Zacha. However, he also said to keep an eye on the Washington Capitals as they need some help up front.

SPECTOR’S NOTE: The Canucks’ new front office still has five weeks before the trade deadline to evaluate their players and determine who to move and who to keep if they decide to become sellers by March 21. It appears they’re going to give this roster a chance to gain some ground in the standings and see if they have a shot at securing a playoff berth. If they fall out of contention, they could start shipping out some players.

The interest in bringing in younger players indicates they’re looking at a quick turnaround rather than a lengthy rebuild. Shopping Miller could help them land such a player. Whether it would be any of those listed above remains to be seen.

← NHL Morning Coffee Headlines - February 17, 2022 NHL Morning Coffee Headlines - February 18, 2022 →
We use cookies on our website to give you the most relevant experience by remembering your preferences and repeat visits. By clicking “Accept”, you consent to the use of ALL the cookies.
Do not sell my personal information.
Cookie SettingsAccept
Manage consent