​The Avalanche spoil Jack Eichel’s Golden Knights debut, the Flames pick up their eighth straight win, the Panthers down the Hurricanes in a possible playoff preview, and more in today’s NHL morning coffee headlines.

NHL.COM: The Colorado Avalanche spoiled Jack Eichel’s debut with the Vegas Golden Knights with a 2-0 victory. Darcy Kuemper made 29 saves for the shutout while Gabriel Landeskog and Mikko Rantanen scored in the third period. Eichel saw 17:32 of ice time, registered one shot and picked up four PIMs. With 74 points, the Avalanche holds a three-point lead over the Florida Panthers atop the overall standings while the Golden Knights (59 points) sit three points behind the first-place Calgary Flames in the Pacific Division.

SPECTOR’S NOTE: Eichel will need time to return fully to game shape after having not played in nearly a year. He will improve as he returns to form in the coming games. 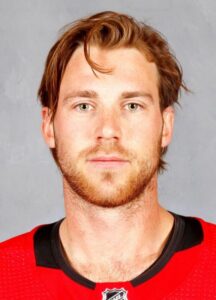 Speaking of the red-hot Flames, they picked up their eighth straight win by thumping the Anaheim Ducks 6-2. Elias Lindholm stretched his points streak to six games with two goals and an assist while Johnny Gaudreau, Matthew Tkachuk and Rasmus Andersson each had three points. The Ducks have 55 points and sit behind the Los Angeles Kings for the final wild-card berth in the Western Conference. The Kings also have 55 points but hold two games in hand over the Ducks.

SPECTOR’S NOTE: Trade rumors could increase about the Ducks if they fail to halt their current slide. Defenseman Hampus Lindholm and Josh Manson and winger Rickard Rakell are slated to become unrestricted free agents this summer. They’ve already surfaced several times in this season’s rumor mill and we could start hearing more about them as trade candidates.

Aaron Ekblad scored in overtime to give the Florida Panthers a 3-2 win over the Carolina Hurricanes in what could be a preview of a potential playoff series between these two clubs. Panthers winger Sam Reinhart scored at 19:11 of the third period to set the stage for Ekblad’s winning goal while teammates Aleksander Barkov and Jonathan Huberdeau each had two points.

SPECTOR’S NOTE: This was the most entertaining game of the night. It was a close contest between two potential Stanley Cup contenders.

Mark Scheifele scored a natural hat trick and picked up an assist as the Winnipeg Jets tamed the Minnesota Wild 6-3. Blake Wheeler had four assists for the Jets (50 points), who moved within five points of the final Western wild-card spot.

SPECTOR’S NOTE: The Jets need a more consistent effort if they hope to gain ground in the playoff race. They’ve won just five of their last 15 games.