​What next for the Ducks and Avalanche following the Josh Manson trade? Could the Islanders shop Semyon Varlamov? What’s the latest on the Golden Knights and Oilers? Find out in today’s NHL rumor mill.

ARE MORE TRADES COMING FOR THE DUCKS AND AVALANCHE?

THE ORANGE COUNTY REGISTER: Elliott Teaford suggests the Anaheim Ducks might not be done dealing after shipping Josh Manson to the Colorado Avalanche yesterday. He reminds us that Ducks general manager Pat Verbeek recently indicated he would trade pending unrestricted free agents like Manson if he couldn’t get them re-signed before the March 21 trade deadline. 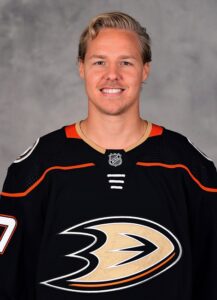 Ducks defenseman (and pending UFA) Hampus Lindholm has been the subject of trade speculation for weeks. He reportedly seeks a longer-term deal than the five-year contract he’s been offered. He could fetch a good return for the Ducks if he’s moved before the deadline.

SPECTOR’S NOTE: Most of the focus will be on Lindholm but he’s not the only UFA the Ducks could peddle by the deadline. Winger Rickard Rakell could also draw interest from clubs seeking a scoring right wing. He’s been linked to the Boston Bruins, New York Rangers and Pittsburgh Penguins in recent trade rumors.

THE ATHLETIC: Peter Baugh observes salary-cap space is tight for the Avalanche. However, they could garner some flexibility by placing captain Gabriel Landeskog and his $7 million cap hit on long-term injury reserve following his knee surgery yesterday.

COLORADO HOCKEY NOW: Adrian Dater rules out the possibility of the Avalanche acquiring goaltender Marc-Andre Fleury from the Chicago Blackhawks. He’s been told there’s not much interest on the Avs part in a big offer for Fleury. He also believes they’ll pursue a forward leading up to the deadline.

SPECTOR’S NOTE: The Avs have been linked to Giroux for weeks but there have been recent rumblings they could be looking at more affordable options such as the Winnipeg Jets’ Andrew Copp. If the focus is to boost their bottom-six, Copp would make the most sense.

WILL THE ISLANDERS SHOP VARLAMOV?

THE ATHLETIC: Kevin Kurz recently reported it’s believed New York Islanders goaltender Semyon Varlamov won’t waive his no-trade clause to go to the Edmonton Oilers. He also wondered if the Washington Capitals (one of Varlamov’s former clubs) might turn to the Isles netminder if they’re unable to acquire Marc-Andre Fleury from the Blackhawks.

A pair of sources told Kurz the Toronto Maple Leafs could be a fit, but any deal involving the cap-strapped Maple Leafs might involve taking on Petr Mrazek and his $3.8 million cap hit through 2023-24. The Vegas Golden Knights could be another option given starter Robin Lehner’s battle with injuries this season.

SPECTOR’S NOTE: Varlamov carries a $5 million annual average value through 2022-23 with a 16-team no-trade clause. Those factors will make him difficult to move if the Islanders wish to shop him as a cost-cutting move. It might have to involve a “hockey trade” with the Isles taking back a player in return.

TSN: Pierre LeBrun speculates there could be some “tire-kicking” on Buffalo Sabres goaltender Craig Anderson. The team has huge respect for Anderson and LeBrun doesn’t think they’ll move him unless he’s comfortable with it.

NBC SPORTS PHILADELPHIA: Jordan Hall believes Flyers backup Martin Jones has solid rental potential for any team with instability between the pipes. He’s a pending UFA on a one-year, $2 million contract. Hall noted a report in late January indicating the Edmonton Oilers were willing to give up a late-round draft pick for Jones but the Flyers likely wanted to let the market play out for leverage purposes.

SPORTSNET’S Elliotte Friedman (stick tap to NHL Watcher) said the Montreal Canadiens are one of the teams with an interest in New Jersey Devils forward Pavel Zacha.

SPECTOR’S NOTE: Zacha, 24, is a restricted free agent with arbitration rights completing a three-year deal with a $2.5 million annual cap hit and $3 million this season in actual salary. The Vancouver Canucks were also reportedly interested in him.

THE ATHLETIC: Joe Smith suggested Vancouver Canucks bottom-six forward Tyler Motte could be an intriguing trade option for the Tampa Bay Lightning. He’s a UFA this summer with a $1.25 million salary-cap hit this season. A second-round pick or an equivalent prospect could be the asking price but it remains to be seen if the Canucks will trade him while they’re jockeying for a wild-card spot in the Western Conference.

UPDATES ON THE GOLDEN KNIGHTS AND OILERS

SPECTOR’S NOTE: With just over $1.2 million in projected deadline cap space, the Golden Knights don’t have much wiggle room here to add a goalie. Varlamov’s $5 million cap hit through next season is too expensive and the Stars aren’t moving Holtby with Anton Khudobin undergoing hip surgery. That leaves Georgiev and Korpisalo and there’s no certainty either guy will give Vegas the boost they need between the pipes.

EDMONTON JOURNAL: Jim Matheson believes Oilers GM Ken Holland has to be in “add mode” as the trade deadline approaches with his club scrambling to nail down a playoff berth. He believes Holland should add an older, bigger defenseman such as the Philadelphia Flyers’ Justin Braun, the Detroit Red Wings’ Marc Staal or the Seattle Kraken’s Carson Soucy. Braun and Staal are pending UFAs while Soucy has a year remaining on his contract with a cap hit of $2.75 million.

SPECTOR’S NOTE: The cap-strapped Oilers will need some help acquiring one of those defensemen. Matheson speculates Holland could be prepared to offer up checking-line forward Josh Archibald (and pending UFA) as a trade chip. However, he might have to include a pick or prospect in the deal.

← NHL Morning Coffee Headlines - March 15, 2022 NHL Morning Coffee Headlines - March 16, 2022 →
We use cookies on our website to give you the most relevant experience by remembering your preferences and repeat visits. By clicking “Accept”, you consent to the use of ALL the cookies.
Do not sell my personal information.
Cookie SettingsAccept
Manage consent