In today’s NHL Rumor Mill, a look at some potential offseason trade candidates for the Flyers plus the latest on Phil Kessel and Craig Anderson.

THE ATHLETIC: In a recent mailbag segment, Charlie O’Connor was asked if the Philadelphia Flyers could attempt to offload James van Riemsdyk in order to shed some salary this summer. He noted the club needs to free up cap space to make additions in the offseason, pointing out the 32-year-old winger is a $7 million player whose production has regressed. 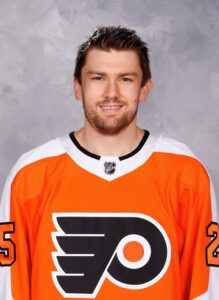 Finding takers for van Riemsdyk won’t be easy. The Flyers could be forced to add a sweetener to make him more enticing in the trade market. It might be easier if they retain half of his salary though it means only saving $3.5 million. A contract buyout won’t clear the full $7 million from their books next season.

Cam Atkinson could be a sell-high trade option given his bounce-back performance this season. However, O’Connor senses the Flyers could prefer retaining him. Travis Konecny, Ivan Provorov or Travis Sanheim could also be cost-cutting options.

SPECTOR’S NOTE: van Riemsdyk has one year left on his contract. So does the 26-year-old Sanheim at $4.675 million. Konecny, 25, is signed through 2024-25 with an annual average value of $5.5 million while the 25-year-old Provorov carries a $6.75 million AAV for three more seasons.

As O’Connor observed, those younger players would have more trade value than van Riemsdyk. Depending on this summer’s trade market, those guys probably won’t have to be packaged with someone else or have salary retained to move them.

That’s not to suggest van Riemsdyk can’t be moved this summer. He lacks no-trade protection and will carry an actual salary of $4 million next season after the Flyers pay his $1 million signing bonus. A club seeking to reach the cap floor next season could have an interest in him, provided the Flyers include a draft pick or a prospect in the deal.

SPORTSNET: In his recent “32 Thoughts” column, Elliotte Friedman reported the Nashville Predators were among the teams interested in Arizona Coyotes winger Phil Kessel at the trade deadline.

SPECTOR’S NOTE: Perhaps the Predators will revisit their interest in Kessel this summer when he becomes an unrestricted free agent? The 34-year-old winger should prove to be an affordable signing at this stage in his career.

Friedman also reported the Buffalo Sabres would like to bring back 40-year-old goaltender Craig Anderson for 2022-23. The club is willing to wait on his timetable and see how he feels after this season.

← NHL Morning Coffee Headlines - April 1, 2022 NHL Morning Coffee Headlines - April 2, 2022 →
We use cookies on our website to give you the most relevant experience by remembering your preferences and repeat visits. By clicking “Accept”, you consent to the use of ALL the cookies.
Do not sell my personal information.
Cookie SettingsAccept
Manage consent