NHL.COM: The Edmonton Oilers tied their franchise-record home win streak at nine games with a 6-5 overtime victory over the St. Louis Blues, who overcame 4-1 and 5-3 deficits to force the extra period. Connor McDavid scored twice, including the game-winner. Zach Hyman also had two goals and Evander Kane had a three-point night for the Oilers (83 points) as they sit one point back of the second-place Los Angeles Kings in the Pacific Division. Pavel Buchnevich tallied twice for the Blues, who are in third place in the Central Division with 84 points. 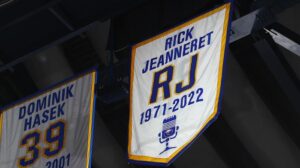 The Buffalo Sabres honored long-time broadcaster Rick Jeanneret with a pre-game banner ceremony before going on to defeat the Nashville Predators 4-3. Jeanneret, the voice of the Sabres since 1971, is retiring at the end of this season. Tage Thompson scored twice for the Sabres while Ryan Johansen had two assists for the Predators, who remain in the first Western Conference wild-card berth with 82 points.

The Tampa Bay Lightning got two goals from Ross Colton to down the Chicago Blackhawks 5-2. Colton and Nick Paul each finished the night with three points as the Lightning picked up their fourth straight victory to move into second place in the Atlantic Division with 92 points. During a break in the action, the Lightning honored Blackhawks forward Tyler Johnson with a video tribute. Johnson was a member of the Bolts for nine seasons before being traded last summer to the Blackhawks.

New York Islanders goaltender Semyon Varlamov made 27 saves to shut out the New York Rangers 3-0. Casey Cizikas, Matt Martin and Mathew Barzal were the goal scorers. The Rangers (93 points) remain one point ahead of the Pittsburgh Penguins in second place in the Metropolitan Division.

The Anaheim Ducks got a 22-save shutout from Anthony Stolarz to blank the Arizona Coyotes 5-0. Trevor Zegras netted his second lacrosse-style goal of the season while Isac Lundestrom tallied twice and picked up an assist as the Ducks snapped their 11-game winless skid.

SPECTOR’S NOTE: Josi had 28 points in 14 games through March to overtake the Colorado Avalanche’s Cale Makar as the leading scorer among defensemen with 81 points. The Predators captain is making a strong case for his second Norris Trophy. Caufield, meanwhile, continues to blossom since Martin St. Louis took over as Canadiens coach in February, picking up 15 points in as many games last month.

THE PHILADELPHIA INQUIRER: An illness could bring Flyers defenseman Keith Yandle’s 989-game Ironman streak to an end if he’s unable to suit up tonight against the Toronto Maple Leafs. Yandle broke the original Ironman record of 964 earlier this season.

← NHL Rumor Mill - April 1, 2022 NHL Rumor Mill - April 2, 2022 →
We use cookies on our website to give you the most relevant experience by remembering your preferences and repeat visits. By clicking “Accept”, you consent to the use of ALL the cookies.
Do not sell my personal information.
Cookie SettingsAccept
Manage consent