In today’s NHL rumor mill, a look at some potential offseason goalie targets for the Oilers while Ilya Samsonov faces an uncertain future with the Capitals.

EDMONTON JOURNAL: Jim Matheson recently suggested the Oilers could be among the teams interested in Ville Husso if the St. Louis Blues goaltender tests this summer’s free-agent market. Husso, 27, has outplayed Jordan Binnington this season for the Blues’ starting goalie job.

THE ATHLETIC: Husso was also on Allan Mitchell’s recent list of possible UFA goaltending targets for the Oilers this summer. Other options could include the Colorado Avalanche’s Darcy Kuemper and the Toronto Maple Leafs’ Jack Campbell. 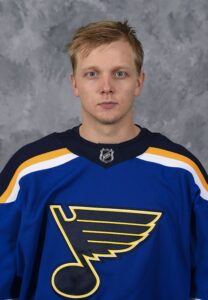 Mitchell believes all three will be expensive. He wondered if Oilers general manager would be able to sign Husso for less than $4.5 million annually over three years.

SPECTOR’S NOTE: The Oilers are expected to let Mikko Koskinen walk via free agency this summer. Aging veteran Mike Smith is signed through next season with a $2.2 million cap hit.

Husso would be the most affordable of the three UFA goalies listed by Mitchell. However, his value in the free-agent market could rise significantly if a growing number of clubs were to consider him a more cost-effective option than Kuemper and Campbell. He’s also only been in the NHL for two seasons and that could make some suitors leery of investing in him.

The Blues could try to re-sign Husso and part ways with Binnington, whose performance has been in decline since backstopping the club to the Stanley Cup three years ago. However, he’s signed through 2026-27 with an annual cap hit of $6 million and a full no-trade clause. A buyout would stretch through 2031-32.

THE ATHLETIC: In a recent mailbag segment, Tarik El-Bashir wrote he doesn’t see the Washington Capitals going into next season with their current tandem of Vitek Vanecek and Ilya Samsonov. The former is fumbling his opportunity to seize the starter’s job while the latter has inspired much confidence.

He believes the Capitals will have to settle on one of them and bring in a veteran capable of being a starter to pair with Vanecek. Samsonov could be shipped to a club that might see the 6-foot 3, 200-pound former first-round pick as an enticing reclamation project. He’d heard rumors before the trade deadline linking Samsonov to the Montreal Canadiens but couldn’t confirm them.

SPECTOR’S NOTE: Samsonov’s promising rookie performance in 2019-20 emboldened the Capitals to part ways with long-time starter Braden Holtby. However, he struggled to make the starter’s job his own and wound up sharing time with Vanecek, who has looked the better of the two since last season.

I also heard those rumors tying Samsonov to the Canadiens but they didn’t last long. Maybe the Canadiens were considering shopping Jake Allen before the trade deadline and saw Samsonov as a possible short-term backup replacement. Maybe there was nothing to this rumor at all. It’ll be interesting to see if it resurfaces in the offseason.

← NHL Morning Coffee Headlines - April 6. 2022 NHL Morning Coffee Headlines - April 7, 2022 →
We use cookies on our website to give you the most relevant experience by remembering your preferences and repeat visits. By clicking “Accept”, you consent to the use of ALL the cookies.
Do not sell my personal information.
Cookie SettingsAccept
Manage consent