Check out the latest Oilers and Leafs speculation plus an update on Ethan Bear in today’s NHL rumor mill.

Spector said sources tell him Marc-Andre Fleury chooses not to play in Edmonton. He anticipates the Oilers’ free-agent targets will be St. Louis’ Ville Husso and Toronto’s Jack Campbell. He envisions a tandem of Campbell and Stuart Skinner. 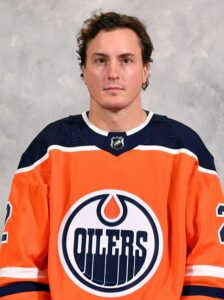 SPECTOR’S NOTE: The Oilers face considerable uncertainty between the pipes for next season. Mikko Koskinen is off to Switzerland while aging Mike Smith could be considering retirement. Even if Smith returns to complete the final season of his contract, they still need a more reliable starter.

Campbell and Husso have shown promise as starters but question marks hover over both. Campbell struggled over the second half of last season with the Maple Leafs, which was his first full campaign as a starter. Husso had a solid regular season with the Blues when Jordan Binnington struggled but gave way to Binnington in the playoffs.

Of those cost-cutting trade candidates, Barrie could attract the most attention. He’s a skilled puck-moving defenseman who could draw interest in the trade market. VancouverHockeyNow’s Rob Simpson believes he’d be a good addition to the Canucks.

WHAT NEXT FOR THE LEAFS AFTER RE-SIGNING LILJEGREN?

Koshan wonders how the Liljegren signing affects Justin Holl’s future with the Leafs. While he carries an affordable $2 million cap hit for next season, re-signing Sandin is a priority. He also anticipates trade-deadline pickup Ilya Lyubushkin will hit the open market on July 13.

With less than $7 million in cap space, Dubas must figure out his goaltending. He also needs to bolster his defense and forward lines.

SPECTOR’S NOTE: It remains to be seen what Dubas has in store to find the cap space to address those needs. However, it wouldn’t be surprising if Holl gets traded (despite his 10-team no-trade list) in a cost-cutting deal to free up space for Sandin’s new contract.

CANUCKS ARMY: Lachlan Irvine cites CHEK TV’s Rick Dhaliwal reporting the Vancouver Canucks have had early discussions with Ethan Bear. The restricted free agent defenseman was given permission by the Carolina Hurricanes to speak with other clubs.

SPECTOR’S NOTE: Dhaliwal said it’s too early to tell how far those talks go between the Canucks and Bear. He could fit their need for younger, affordable talent, especially on their blueline.

← NHL Morning Coffee Headlines - June 28, 2022 NHL Morning Coffee Headlines - June 29, 2022 →
We use cookies on our website to give you the most relevant experience by remembering your preferences and repeat visits. By clicking “Accept”, you consent to the use of ALL the cookies.
Do not sell my personal information.
Cookie SettingsAccept
Manage consent