In this installment of the Sunday NHL rumor roundup, a look ahead to the Rangers offseason plus the latest Oilers speculation.

WHAT NEXT FOR THE RANGERS?

ESPN.COM: Greg Wyshynski examines the keys to the offseason for the New York Rangers following their elimination from the Eastern Conference Finals. They have some intriguing free agents heading into this summer.

Ryan Strome and Andrew Copp are slated to become unrestricted free agents on July 13. Copp is a more versatile forward but Strome has better chemistry with winger Artemi Panarin. They’ll need to find a creative way to free up cap space to retain both on multi-year contracts. 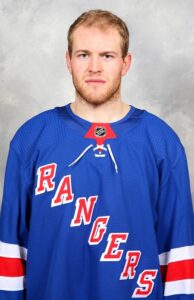 One way could be signing restricted free agent winger Kaapo Kakko to a low-cost bridge deal. Another could be bringing in a backup goalie making less than what RFA netminder Alexandar Georgiev will make this summer.

NEW YORK POST: Larry Brooks acknowledged there will be questions hanging over the Rangers’ roster this summer, namely that of Strome’s contract status. However, he considers the performance of their young players may have changed that puzzle.

SPECTOR’S NOTE: Cap Friendly indicates the Rangers have $13.5 million in salary cap space with 14 players under contract for 2022-23. Sammy Blais is another of their noteworthy free agents. The RFA winger spent most of this season sidelined by a knee injury.

Acquiring Copp cost the Rangers their first-round pick in this year’s draft. That could be an incentive to re-sign him over Strome if they can’t free up sufficient cap room for both players. It could cost over $5 million annually to re-sign Copp while Strome will seek a significant raise over his current $4.5 million AAV.

Rangers coach Gerard Gallant raised some eyebrows by making Kakko a healthy scratch for Game 6 of the Conference Final against the Tampa Bay Lightning. That could prompt some speculation over his future with the Rangers, perhaps even generate talk of him becoming a cost-cutting casualty.

However, Kakko’s coming off his entry-level contract and lacks arbitration rights. As Wyshynski speculates, they could simply sign him to a low-cost bridge deal to give them some wiggle room for another signing or roster addition.

SPORTSNET (via KUKLA’S KORNER): Elliotte Friedman reports the Edmonton Oilers have asked Mike Smith and Duncan Keith to inform them by July 1 if they intend to return next season or retire. Smith was banged-up during the postseason while Keith didn’t say much.

EDMONTON JOURNAL: Kurt Leavins believes Smith and Keith can still help the Oilers next season. Based on what he’s been told, Leavins would be very surprised if Keith hangs up his skates, adding the veteran blueliner might try to extend his playing career beyond 2022-23.

However, he can see Smith retiring. While the veteran goaltender’s talent and desire remain clear, age and injuries may be wearing down the 40-year-old.

SPECTOR’S NOTE: Smith’s $2.2 million cap hit would come off the Oilers’ books if he retires. If he can’t physically play, they can place him on LTIR for the season. Keith’s cap hit is over $5.5 million but his actual salary is $1.5 million.

SPECTOR’S NOTE: Husso, Kuemper and Campbell all have their strengths and weaknesses. I still expect the Leafs to re-sign Campbell while it’s perhaps 50-50 that Kuemper and Husso remain with their current clubs. The Oilers could face a bidding war for their services given the limited goalie options among this summer’s free-agent class.

Gibson is signed through 2026-27 with an annual cap hit of $6.4 million and a 10-team no-trade clause. He could be reluctant to waive it to join a Canadian team. The Sharks recently acquired Kahkonen so he’s not going anywhere. Neither is Nedeljovic after being acquired last summer from Carolina. Blackwood has been battling injuries and inconsistency over the past two seasons. Comrie could be an affordable backup signing.

← NHL Morning Coffee Headlines - June 12, 2022 NHL Morning Coffee Headlines - June 13, 2022 →
We use cookies on our website to give you the most relevant experience by remembering your preferences and repeat visits. By clicking “Accept”, you consent to the use of ALL the cookies.
Do not sell my personal information.
Cookie SettingsAccept
Manage consent