Check out my take on the notable trades and free-agent signings from the second day of the 2022 NHL Draft.

The Carolina Hurricanes traded defenseman Tony DeAngelo to the Philadelphia Flyers in exchange for second, third and fourth-round picks (Detail to follow). The Flyers then signed the 27-year-old DeAngelo to a two-year contract with an annual average value of $5 million. 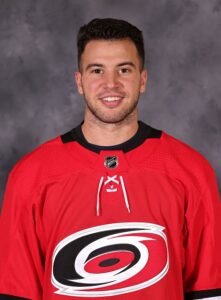 SPECTOR’S NOTE: This is going to go one of two ways. DeAngelo will either get along well with new Flyers head coach John Tortorella and play his system or they’ll get on like chalk and cheese and this will be a train wreck. For a fragile club on their third coach in less than a year that was walloped by injuries and also shipped out their captain at the trade deadline, drama is the last thing they need right now.

DeAngelo enjoyed a bounce-back performance last season (51 points) with the Hurricanes on a one-year, $1-million contract after being bought out by the New York Rangers. He had no issues with his teammates or head coach Rod Brind’Amour but the Canes couldn’t afford to sign him. He’s a skilled puck-mover but his defensive play doesn’t match his offensive abilities. DeAngelo will be forced to improve that aspect of his game under Tortorella or face a sharp reduction in ice time.

SPECTOR’S NOTE: The Devils were in the market for a goalie to share the duties with Mackenzie Blackwood. Vanecek, 27, is a restricted free agent coming off a three-year deal worth over $716K per season and will be seeking a raise with his new club but shouldn’t break the bank. He put up decent regular-season numbers but his playoff stats aren’t anything to write home about. He’ll be best used in a backup role.

It was rumored the Devils might get into the market for an established starter like Colorado’s Darcy Kuemper. Perhaps they still will but that would mean moving out Blackwood, who’s struggled with injuries and inconsistency over the past two years. My guess is they’re going with a Blackwood-Vanecek tandem.

Detroit Red Wings acquire goaltender Ville Husso from the St. Louis Blues in exchange for a third-round pick in the 2022 NHL Draft. The Wings then signed the 27-year-old Husso to a three-year contract extension worth an annual average value of $4.75 million.

SPECTOR’S NOTE: Red Wings GM Steve Yzerman opts not to bring in another aging backup but instead lands a younger netminder with starter experience. Husso will share the goalie duties with starter Alex Nedeljkovic and could perhaps push the Red Wings starter, who had some consistency issues last season.

The Blues would’ve preferred to re-sign Husso but lacked sufficient cap space to do so, especially when they’re trying to re-sign winger David Perron. They’ll be in the market for a suitable backup for Jordan Binnington via trade or free agency.

← NHL Rumor Mill - July 8, 2022 NHL Morning Coffee Headlines - July 9, 2022 →
We use cookies on our website to give you the most relevant experience by remembering your preferences and repeat visits. By clicking “Accept”, you consent to the use of ALL the cookies.
Do not sell my personal information.
Cookie SettingsAccept
Manage consent