THE DALLAS MORNING NEWS: The Stars signed Jake Oettinger to a three-year contract worth $4 million annually. The 23-year-old goaltender was a restricted free agent coming off his entry-level contract. 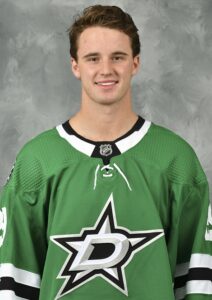 Oettinger took over as their starting goaltender midway through last season. He backstopped them to the seventh game of the first round of the 2022 NHL playoffs, making a franchise-record 64 saves in a 3-2 overtime loss.

SPECTOR’S NOTE: It’s a reasonable bridge deal, giving Oettinger a well-deserved raise that doesn’t break the bank for the Stars. It also sets him up for a more lucrative new contract if he can build upon last season’s promising performance.

SPORTSNET: Eric Engels reports the Montreal Canadiens are discussing a new contract with Kirby Dach. The 21-year-old restricted free agent was acquired from the Chicago Blackhawks in July. One of the options being discussed is a four-year contract with an average annual value of around $3.5 million.

SPECTOR’S NOTE: Dach, a third-overall pick of the Blackhawks in 2019, struggled through injury and inconsistency in his years in Chicago. However, he still has plenty of time to regain his promising form. Perhaps the move to the rebuilding Canadiens will help.

Habs management could be banking on it if they’re willing to sign him to a four-year deal. The $3.5 million wouldn’t be extravagant but it could be argued that he hasn’t earned that pay level yet.

NEW YORK POST: Multiple sources claim the Rangers are attempting to trade Nils Lundkvist. The 22-year-old defenseman informed management that he’s unlikely to report to training camp in the absence of a deal.

Rangers general manager Chris Drury is working with Claude Lemieux (Lundkvist’s agent) to find a trade to a club that will give his client an opportunity to see top-four minutes and powerplay time. It’s believed Drury is seeking a young, top-nine center who can grow within the Rangers’ organization.

SPECTOR’S NOTE: The report adds that Lundkvist has no issues with the Rangers. He just doesn’t see an opportunity to develop on their deep blueline.

This situation resembles Vitali Kravtsov’s standoff with the Rangers last season when he went to Russia to await a trade rather than report to their AHL affiliate. He still remains with the Rangers, however, and will try to earn a roster spot in training camp.

Time will tell if Lundkvist suffers the same fate. He could have more value in the trade market than Kravtsov given his position as a puck-moving, right-shot defenseman. Perhaps the Vancouver Canucks, Arizona Coyotes or Detroit Red Wings will be among his suitors.

SPECTOR’S NOTE: Neal has reached or exceeded the 20-goal plateau 10 times in his NHL career. However, his best seasons are now well behind him. This is probably his last chance to stay in the big league.

THE ATHLETIC/WINNIPEG SUN: Leah Hextall is speaking about her difficult first season calling nationally televised NHL games for ESPN. She was subjected to sexist and misogynistic threats on social media and phone messages.

The worst came from someone threatening to track her down in her hometown of Winnipeg to sexually assault and kill her. “It was that shocking, more than anything, that someone would have that much anger towards me because I was calling a hockey game,” she said. “A hockey game. I’m not saving lives here. I’m just calling a hockey game, and you were willing to threaten my physical and sexual safety?”

Despite the abuse, Hextall will be returning behind the mike this season with ESPN. She wants to inspire girls and women who hope to one day follow her path into hockey broadcasting. She also hopes hockey will bring more women into the game.

Hextall has been covering the NHL since 2012 with several major sports networks before joining ESPN’s NHL broadcast team last season.

SPECTOR’S NOTE: I encourage everyone to read the links attached for the full details of Hextall’s story.

It’s one thing to be critical of how someone reports or broadcasts the game. I’ve faced it myself and it’s part of the job.

However, the abuse and threats Hextall faced, mainly because she’s a woman, were uncalled for and shocking. There’s no need for it at all and no one should have to face that.

I hope Hextall perseveres and becomes a role model for everyone who wants to get into the industry.