Potential candidates for the Flyers’ captaincy, Logan Couture explains why he’s sticking with the Sharks, five Bruin players with something to prove in 2022-23, and more in today’s NHL Morning Coffee Headlines.

THE PHILADELPHIA INQUIRER: Olivia Reiner recently listed the top contenders (in alphabetical order) to take over the Flyers’ captaincy. Cam Atkinson, Sean Couturier, Kevin Hayes, Scott Laughton and Travis Sanheim are her top five to replace Claude Giroux, who held the role for almost nine years until his trade to the Florida Panthers in March. 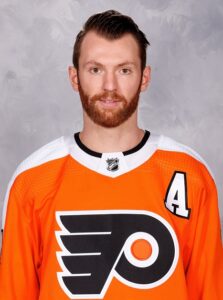 SPECTOR’S NOTE: Couturier would be my choice. He’s their best and most versatile two-way forward. As Reiner pointed out, they struggled to replace him following season-ending back surgery in February. Couturier leads by example and always brings his best effort to every game.

THE ATHLETIC: In a recent interview with Corey Masisak, Logan Couture said he didn’t consider the option of getting traded when asked about it by new San Jose Sharks general manager Mike Grier.

“No, not at this stage of my life and where I’m at outside hockey,” said Couture. “I love this area. I’m getting married in this area next summer. I love being a Shark. So I didn’t think twice about it.”

SPECTOR’S NOTE: Couture also said he understood when Brent Burns accepted a trade to the Carolina Hurricanes. He indicated he spent a lot of time talking to him, citing that the 37-year-old defenseman wanted to play for a winner while he still could.

Couture said Grier contacted him to discuss his plans for the club. The Sharks captain informed his new GM that he would do whatever he could to help get them back in the right direction.

Assuming Couture wanted a trade, moving him wouldn’t be easy. Cap Friendly indicates the 33-year-old is signed through 2026-27 with an average annual value of $8 million and a three-team trade list.

NBC SPORTS BOSTON: Goaltenders Jeremy Swayman and Linus Ullmark are among Nick Goss’ list of five Bruins with something to prove in 2022-23. Forwards Trent Frederic, Craig Smith, and defenseman Mike Reilly round out the list.

SPECTOR’S NOTE: Swayman and Ullmark have the most to prove. The Bruins need both goalies to be at their best to reach the playoffs in a very tough Atlantic Division this season.

WHL.COM: Former NHL defenseman Brent Seabrook will be joining the Vancouver Giants as a player development coach. Seabrook, 37, spent his entire 15-season NHL tenure with the Chicago Blackhawks from 2005-06 to 2019-20, winning three Stanley Cups before injuries ended his playing career.

VEGAS HOCKEY NOW: The Golden Knights reverse retro jersey for the coming season appears to have been leaked.

← Sunday NHL Rumor Roundup - September 4, 2022 NHL Rumor Mill - September 5, 2022 →
We use cookies on our website to give you the most relevant experience by remembering your preferences and repeat visits. By clicking “Accept”, you consent to the use of ALL the cookies.
Do not sell my personal information.
Cookie SettingsAccept
Manage consent