In today’s NHL Rumor Mill: the latest Oilers speculation, the Canucks could be in the market for a defenseman, and the latest on Jakob Chychrun.

OILERS NOW: (stick tap to “Editor in J”), Daily Faceoff’s Frank Seravalli reported there’s no shortage of teams who have reached out to the Chicago Blackhawks about Patrick Kane. Those clubs include the Edmonton Oilers, Toronto Maple Leafs and New York Rangers.

SPECTOR’S NOTE: I don’t doubt that there are teams curious about Kane’s future. The 33-year-old right winger remains among the NHL’s elite scorers. He is slated to become an unrestricted free agent in July and might not be keen to stick around for a long rebuilding process.

Kane’s contract, however, remains a serious stumbling block toward any potential trade. He’s got a full no-movement clause giving him complete control over whether he’ll accept a trade and potential destinations.

The other issue is Kane’s average annual salary. His cap hit is $10.5 million but he earns $6.9 million in actual salary, of which $4 million was paid as a signing bonus in July. Nevertheless, that cap hit will be difficult to move unless the Blackhawks retain half of it. For cap-strapped teams like the Oilers and Leafs, that could also mean getting a third team involved to make the cap hit more palatable. 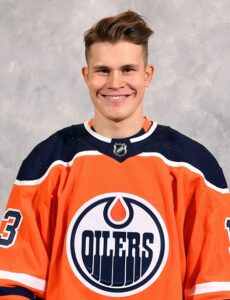 In other words, the Oilers can inquire about Kane but it will take quite an effort on their part to acquire him, assuming he’ll accept a trade to Edmonton.

Seravalli also said he wouldn’t close the door on the Oilers trading Jesse Puljujarvi before the regular season opens next month.

SPECTOR’S NOTE: The Oilers need to clear cap space to sign restricted free agent forward Ryan McLeod. If the Oilers sign McLeod now, they are allowed to be over the cap during training camp but must become cap compliant when the season opens next month.

That’s made Puljujarvi fodder for trade speculation. The 24-year-old winger agreed to a one-year, $3 million contract in July.

There is no indication from any insiders if he’s drawn much interest in the trade market. That could change as teams evaluate their roster needs during training camp.

GOPHNX.COM: “How will the (Arizona) Coyotes manage the Jakob Chychrun situation?” is among 10 questions Craig Morgan believes the club faces entering training camp. The 24-year-old defenseman made clear his displeasure over the club’s ongoing rebuild at the end of last season, fueling speculation of an offseason trade. However, he remains a Coyote.

Chychrun is expected to speak to the media on Wednesday. He’s still rehabbing a wrist injury and isn’t ready yet to return to the ice. Head coach Andre Tourigny said he has a really good relationship with Chychrun and looks forward to working and talking with him.

SPECTOR’S NOTE: Chychrun was the subject of trade speculation since last December. It shows no sign of abating. The Ottawa Sun’s Bruce Garrioch claims the Coyotes blueliner remains on the Senators’ radar.

As always, the sticking point is the Coyotes’ asking price. Speculation has varied depending on the reporter but it’s believed they want a return heavy on futures including at least a first-round pick and a top prospect or good young player.

There’s no indication that Coyotes GM Bill Armstrong intends to reduce his price. He’s not in any rush to move Chychrun, who’s signed through 2024-25.

SPORTSNET: Iain MacIntyre reported Allvin indicated nothing really materialized over the summer regarding a trade to bolster the Canucks blueline. If something comes along that makes the team better, he’d be open to that.

← NHL Morning Coffee Headlines - September 21, 2022 NHL Morning Coffee Headlines - September 22, 2022 →
We use cookies on our website to give you the most relevant experience by remembering your preferences and repeat visits. By clicking “Accept”, you consent to the use of ALL the cookies.
Do not sell my personal information.
Cookie SettingsAccept
Manage consent