The Islanders’ Ilya Sorokin shut out the Rangers, Brad Marchand could return to the Bruins sooner than expected and the Senators’ Josh Norris could be sidelined for the season. Details and more in today’s NHL Morning Coffee Headlines.

NHL.COM: New York Islanders goaltender Ilya Sorokin turned in a 41-save shutout to blank the New York Rangers 3-0. Kyle Palmieri scored two goals and Josh Bailey also tallied for the Islanders, who raise their record to 3-4-0. The Rangers (3-3-2) are winless in their last four games.

SPECTOR’S NOTE: Before this game, the Islanders placed forward Kieffer Bellows on waivers. 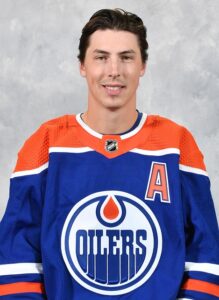 Edmonton Oilers center Ryan Nugent-Hopkins tallied his 200th career goal and Stuart Skinner turned aside 37 shots in a 3-1 victory over the St. Louis Blues. Zach Hyman had a goal and an assist for the Oilers as their record improves to 4-3-0. Ryan O’Reilly netted the only goal for the Blues (3-2-0), who’ve lost two straight games.

Tampa Bay Lightning defensemen Victor Hedman and Mikhail Sergachev each had two points as their club doubled up the Anaheim Ducks 4-2. Nick Paul also had two points for the Bolts as they improve to 4-4-0. Trevor Zegras and Troy Terry replied for the Ducks, who fall to 1-5-1.

BOSTON HOCKEY NOW: The Bruins could have Brad Marchand back in the lineup sooner than expected. Originally projected to return from double hip surgery by the American Thanksgiving weekend in late November, the 34-year-old winger has been skating regularly in practice with his teammates over the past two weeks.

SPECTOR’S NOTE: Marchand requires medical clearance from team doctors before he can return to action. Given he’s already ahead of schedule in his recovery, he could be back before mid-November.

OTTAWA SUN: Bad news for Senators center Josh Norris as he’s sidelined long-term with an injured left shoulder that could require surgery. It’s possible he could miss the rest of this season but the club will learn more about his condition over the next four or five days.

SPECTOR’S NOTE: Losing Norris for a significant period is a big blow for the Senators but not necessarily a fatal one for their season. With Tim Stutzle having moved up to center the first line, veterans Claude Giroux and Derrick Brassard in the lineup and rookie Shane Pinto off to a promising start, they have the depth to offset Norris’ absence.

General manager Pierre Dorion also has the cap space and young assets to draw up if necessary to acquire a center in the trade market. For now, I expect he’ll see how well his club adjusts before going that route.

MONTREAL HOCKEY NOW: Canadiens rookie winger Juraj Slafkovsky (upper-body injury) still hasn’t been given the green light to resume play but will travel with the club for their upcoming road trip.

Speaking of the Canadiens, they acquired minor-league defenseman Nicolas Beaudin from the Chicago Blackhawks in exchange for minor-league forward Cam Hillis. Beaudin has 22 games of NHL experience since 2019-20.

THE COLUMBUS DISPATCH: The Blue Jackets placed defenseman Adam Boqvist on injured reserve and called up 18-year-old David Jiricek, who was their first-round pick (sixth overall) in this year’s NHL Draft. Boqvist will be sidelined for six weeks with a broken foot.

WINNIPEG SUN: Jets head coach Rick Bowness will not be accompanying the team on their three-game road trip. He suffered dizzy spells on Monday that could be related to his recent bout with COVID-19.