The Canadiens are talking trade with the Capitals regarding a forward plus the latest on the Leafs and the Penguins in today’s NHL Rumor Mill.

CANADIENS TALKING TRADE WITH CAPITALS AND OTHER CLUBS.

TSN: Pierre LeBrun reports the Montreal Canadiens have been talking about a trade with the Washington Capitals though they haven’t progressed beyond the discussion stage. 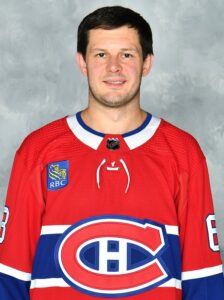 Washington winger Connor Brown is out six-to-eight months, given the Capitals $3.6 million of cap space to work with. For now, they’re content to explore their internal options to replace Brown, including their recent recall of winger Sonny Milano.

LeBrun reports the Canadiens have also reached out to several other teams looking to create a trade market for their glut of forwards. He mentioned Evgenii Dadonov, Jonathan Drouin and Mike Hoffman as trade candidates.

MONTREAL HOCKEY NOW: Marc Dumont suggested the Canadiens could grease the skids to moving one of those forwards by agreeing to retain 50 percent of their salary-cap hit. That would mean Drouin would only cost the Capitals (or another club) $2.75 million. Dadonov would come in at $2.5 million while Hoffman would be $2.25 million.

SPECTOR’S NOTE: The Canadiens have placed Dadonov on injured reserve for now though earlier reports claimed he was suffering from a non-COVID-related illness. They could demote Juraj Slafkovsky to their AHL affiliate in Laval because he’s waiver-exempt but it appears they’d prefer to keep the promising 18-year-old rookie winger in the lineup.

Dadonov, Drouin or Hoffman could also be placed on waivers and demoted if they go unclaimed, though that would only provide the Habs with $1.125 million in cap relief. The preference for the Habs seems to be getting their entire cap hit off their books. Dadonov and Drouin are eligible for unrestricted free agent status next July while Hoffman is signed through 2023-24.

Dadonov’s and Drouin’s pending UFA status could make them enticing to contenders as rental players, especially at 50 percent salary retention. The rebuilding Canadiens could seek a draft pick or a prospect for either guy or perhaps a young, affordable defenseman.

The problem, however, is Dadonov, Drouin and Hoffman aren’t playing well this season. Maybe their production would improve by joining a playoff contender with a deeper roster but that doesn’t make them any easier to move.

TSN: Chris Johnston speculated the Toronto Maple Leafs could be in need of a defenseman if Jake Muzzin should become sidelined for the season with a neck injury. That would provide them with additional cap space ($5.625 million) to play with.

THE ATHLETIC: Pierre LeBrun believes the Leafs should go the trade route if things don’t improve instead of making a coaching change. He acknowledged the difficulty of making moves this early in the season under a flat cap but pointed to the recent moves made by the Vancouver Canucks in acquiring center Jack Studnicka and defenseman Ethan Bear. “Nothing big, but they’re tweaks that could help the team,” he wrote.

SPECTOR’S NOTE: LeBrun wrote this before the Leafs’ win over the Flyers on Wednesday. Nevertheless, he thinks it’s too early for panic in the Toronto market and anticipates they’ll soon reverse their fortunes.

As for Muzzin, the Leafs are still awaiting clarity on his condition and how long he could be sidelined. If he’s out for the season, however, I think they’ll go shopping for a suitable replacement, preferably by the March trade deadline when the market has improved.

NO TRADES COMING FOR THE PENGUINS?

THE ATHLETIC: Following the Pittsburgh Penguins’ loss to the Buffalo Sabres, Josh Yohe wrote that he didn’t expect they’ll be making a big trade anytime soon.

“Who are they going to trade? Who would they be willing to part with that another team would covet,” wrote Yohe. He believes the only solution to their six-game losing skid is for them to start playing better.

SPECTOR’S NOTE: After winning three of their first four games and picking up points in each of those contests, the Penguins have been in free fall. Their best players simply haven’t played like it for long stretches. Worse, they’re looking slower than their opponents, which could be the kiss of death in a league that’s trending toward speed and skill.

As for trade candidates, Pierre-Olivier Joseph was a frequent topic of media trade chatter throughout October. However, the 23-year-old defenseman hasn’t been mentioned much recently in the rumor mill over the past week or so. Regardless, he won’t fetch the type of significant return the Penguins need to shake things up and reverse their fortunes.

← NHL Morning Coffee Headlines - November 4, 2022 NHL Morning Coffee Headlines - November 5, 2022 →
We use cookies on our website to give you the most relevant experience by remembering your preferences and repeat visits. By clicking “Accept”, you consent to the use of ALL the cookies.
Do not sell my personal information.
Cookie SettingsAccept
Manage consent