Alex Ovechkin reaches another goal-scoring milestone, the Coyotes beat the Bruins for the first time since 2010, Kevin Bieksa disputes Zdeno Chara’s story about the Canucks in the 2011 Stanley Cup Final, and more in today’s NHL Morning Coffee Headlines.

NHL.COM: Washington Capitals captain Alex Ovechkin scored the 500th even-strength goal of his NHL career in a 4-1 victory over the Seattle Kraken. Ovechkin is now just four goals away from 800 and six away from surpassing Gordie Howe for second place on the all-time list. The Capitals have won three straight games and improved to 13-12-4 while the Kraken slip to 15-8-3. 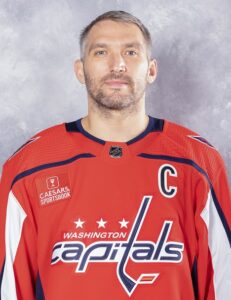 SPECTOR’S NOTE: Kraken defenseman Jamie Oleksiak was ejected in the second period for an illegal hit to the head of Capitals blueliner Alexander Alexeyev, who left the game with an upper-body injury.

The Arizona Coyotes defeated the Boston Bruins for the first time since 2010 as Lawson Crouse’s goal with 14 seconds remaining in the third period lifted them to a 4-3 win. Crouse finished the night with two goals while Karel Vejmelka made 44 saves for the Coyotes (8-13-4). David Pastrnak scored his 19th of the season for the Bruins (21-4-1), who maintain their hold on first place in the overall standings with 43 points.

SPECTOR’S NOTE: Crouse’s goal was the result of a linesman negating what the Bruins believed should’ve been an icing call. It caught them by surprise, leading to a turnover that resulted in Crouse’s game-winner.

New York Islanders center Brock Nelson scored two goals in a 6-4 win over the New Jersey Devils. Mathew Barzal and Alexander Romanov each collected two assists as the Islanders move to 17-11-0 on the season. Jack Hughes, Jesper Bratt and Dougie Hamilton each had two points for the Devils (21-5-1), who missed an opportunity to vault over the Bruins into first place in the overall standings.

SPECTOR’S NOTE: Hughes finished the game with a shift of 6:02, setting a league record for the longest recorded shift. Islanders winger Anthony Beauvillier left the game in the first period with what’s believed to be a lower-body injury.

An overtime goal by Jonathan Marchessault gave the Vegas Golden Knights a 2-1 win over the Philadelphia Flyers. William Carrier also scored for the Golden Knights (20-8-1), who remain on top of the Western Conference with 41 points. Scott Laughton replied for the 9-13-6 Flyers.

SPECTOR’S NOTE: Flyers defenseman Tony DeAngelo was a healthy scratch from this contest.

The Winnipeg Jets picked up their fourth straight win by downing the Chicago Blackhawks 3-1. Cole Perfetti, Blake Wheeler and Adam Lowry scored for the Jets (18-7-1) as they sit atop the Central Division with 37 points. Taylor Raddysh replied for the Blackhawks as they sink to 7-15-4.

Pittsburgh Penguins center Jeff Carter scored in overtime to beat the Buffalo Sabres by a score of 4-3. Evgeni Malkin and Rickard Rakell each had two points as the Penguins (15-8-4) have won four straight games. Casey Mittelstadt collected three assists for the 12-13-2 Sabres.

SPECTOR’S NOTE: Sabres winger Jeff Skinner faces a hearing on Saturday with the NHL department of player safety for cross-checking Penguins forward Jake Guentzel in the face during the dying seconds of the third period.

Edmonton Oilers captain Connor McDavid scored to extend his goal streak to seven games in a 5-2 win over the Minnesota Wild. Ryan Nugent-Hopkins had three points while Stuart Skinner made 42 saves as the Oilers improved to 16-12-0. Wild winger Kirill Kaprizov collected an assist to extend his points streak to 14 games while his club dropped to 13-11-2 on the season.

SPECTOR’S NOTE: McDavid leads the league with 25 goals and 54 points.

A 41-save performance by Igor Shesterkin carried the New York Rangers to a 2-1 win over the Colorado Avalanche on shootout goals by Mika Zibanejad and Artemi Panarin. Braden Schneider scored in regulation for the Rangers as they raise their record to 14-10-5. Mikko Rantanen tallied for the injury-depleted Avalanche (13-10-2) as they’ve gone winless in four straight games.

The Columbus Blue Jackets ended a three-game skid by dropping the Calgary Flames 3-1. Patrik Laine, Eric Robinson and Sean Kuraly tallied for the Jackets (9-15-2) but they lost goaltender Joonas Korpisalo to a lower-body injury during the first period. Michael Stone replied for the Flames, who fall to 13-11-3.

SPECTOR’S NOTE: This was Johnny Gaudreau’s first game again the Flames since signing with the Blue Jackets in July. He was held scoreless in this contest.

San Jose Sharks rookie goaltender Eetu Makiniemi made 23 saves for his first NHL win in a 6-1 thrashing of the Anaheim Ducks. Erik Karlsson, Timo Meier and Tomas Hertl each collected two points for the Sharks as they improved to 9-16-5. Trevor Zegras replied for the 7-18-3 Ducks.

SPECTOR’S NOTE: Sharks captain Logan Couture left this contest in the third period after blocking a shot. The club had no update on his condition following the game.

In a recent interview with the “Games With Names” podcast, Chara claimed the Canucks were practicing how to handle the Stanley Cup after winning the first two games of the series in Vancouver. He also said the Canucks were apparently calling the league to find out how many family members they were allowed to have on the ice to help them celebrate after winning the Cup. Chara said he and his teammates used those stories as motivation as they rallied and defeated the Canucks in seven games.

SPECTOR’S NOTE: Sounds like the bad blood between the players on those teams hasn’t fully faded despite the passage of time. It’ll be interesting to hear if Chara and Bieksa have any further comments about this.

OTTAWA SUN: League sources say NHL commissioner Gary Bettman and deputy commissioner Bill Daly are telling prospective bidders for the Senators that they want actor Ryan Reynolds to be a minority partner. The league believes Reynolds production company can tell the story of the Senators’ sale plus their marketing department likes the publicity the actor would generate for the team.

SPECTOR’S NOTE: Reynolds has previously expressed interest in buying the Senators if he could get a partner to help him with the purchase.

TSN: Speaking of the Senators, forward Mathieu Joseph is out for two weeks with a lower-body injury.