The latest trade speculation about the Canadiens Joel Edmundson and Josh Anderson, skepticism over the Oilers’ rumored interest in Erik Karlsson and an update on Jesse Puljujarvi in today’s NHL Rumor Mill.

LATEST ON EDMUNDSON AND ANDERSON

MONTREAL HOCKEY NOW: Marco D’Amico recently cited TSN’s Ryan Rishaug and The Athletic’s Arpon Basu discussed how the Canadiens’ Joel Edmundson would be a good fit with the Edmonton Oilers’ blueline and what it might cost to acquire the veteran defenseman. 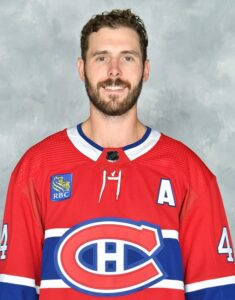 Basu believes Edmundson would be a better option for the Canadiens to acquire a first-round pick than center Sean Monahan, citing the 29-year-old’s playoff history. If that’s not possible, they might accept a former first-round pick, prompting Rishaug to suggest prospect Xavier Bourgault, who was chosen 22nd overall by the Oilers in the 2021 draft.

In a follow-up piece on Edmundson’s trade value, D’Amico responded to those skeptical over Edmundson fetching a first-round pick or a former first-rounder. He cited the return the Canadiens received from the Florida Panthers for Ben Chiarot at last season’s trade deadline as one example.

SPECTOR’S NOTE: Canadiens general manager Kent Hughes also got a first-rounder from the Calgary Flames for Tyler Toffoli last February and convinced the Flames to include a first-rounder when he acquired Monahan in August.

That’s raised expectations among Canadiens fans that Hughes can pull this off every time he flogs a player in the trade market or acquires one from a club looking to shed salary. They should prepare themselves for the possibility that he might not get a first-rounder for Monahan or Edmundson though I don’t rule it out. Still, landing a promising prospect who can fit well within their system could be just as worthwhile.

A recent episode of the “Ray and Dregs Hockey Podcast had TSN’s Ray Ferraro and Darren Dreger discussing the speculation around the league over what the Canadiens will do with Josh Anderson. Dreger believes any team in the market for a scoring forward would look at the 28-year-old Anderson.

Both analysts agreed the Canadiens aren’t in any hurry to move Anderson as they don’t have any salary-cap issues to deal with this season. Dreger felt the winger could be a good fit with the New Jersey Devils but the cost of the trade could keep the two clubs from reaching an agreement.

SPECTOR’S NOTE: There’s a sense that Hughes will peddle Anderson sooner or later. He’s signed through 2026-27 with a $5.5 million annual cap hit and an eight-team no-trade clause. That’s a move that seems more likely to occur in the offseason when teams have more salary-cap flexibility.

Seravalli said the report of the Oilers’ supposed interest in Karlsson came as news to the Sharks’ front office. He also pointed out the difficulty in moving the 32-year-old blueliner’s contract. If the Sharks retain any portion of it, Seravalli doubts they’ll get much of a return and if they don’t retain any of it they won’t get anything.

He also believes the Oilers would reject an offer of Karlsson with 50 percent retained salary in exchange for Jesse Puljujarvi because they still have to re-sign Evan Bouchard next summer.

SPECTOR’S NOTE: I’m summarizing the key parts of what Seravalli said but I agree with his overall assessment. It’s worth noting that he wasn’t disparaging Dreger’s report but merely doubted that the Oilers could afford Karlsson.

Would the Oilers like to have Karlsson on the blueline? Of course they would, who wouldn’t? However, his hefty contract (assuming he’d waive his no-movement clause) makes that deal almost impossible to pull off.

NHL WATCHER: cited Sportsnet’s Elliotte Friedman saying the Oilers have tried moving Puljujarvi in the past but didn’t receive offers to their liking due to his lack of production. Given the winger’s recent comments questioning whether he has what it takes to be an NHL scorer, Friedman thinks they might not have much choice but to move him for the best deal they can find.

SPECTOR’S NOTE: Puljujarvi’s comments could further tank his trade value. While he’s under a one-year contract worth $3 million, there might not be many takers for a once-promising winger filled with self-doubt over his scoring ability.

← NHL Morning Coffee Headlines - December 10, 2022 NHL Morning Coffee Headlines - December 11, 2022 →
We use cookies on our website to give you the most relevant experience by remembering your preferences and repeat visits. By clicking “Accept”, you consent to the use of ALL the cookies.
Do not sell my personal information.
Cookie SettingsAccept
Manage consent