The Leafs’ Mitch Marner extends his points streak while the Stars’ Jason Robertson’s comes to an end, the Avalanche’s Nathan MacKinnon is sidelined for a lengthy period, an update on the Penguins’ Kris Letang, and more in today’s NHL Morning Coffee Headlines.

NHL.COM: Toronto Maple Leafs winger Mitch Marner collected an assist to extend his points streak to 20 games in a 4-0 victory over the Dallas Stars. Matt Murray turned in a 44-save shutout while Auston Matthews had a goal and an assist as the Leafs improved their record to 16-5-6. The Stars’ Jason Robertson had his points streak end at 18 games as his club’s record falls to 14-7-5. 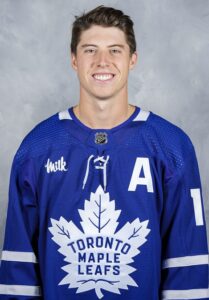 Pittsburgh Penguins captain Sidney Crosby scored twice and Tristan Jarry kicked out 38 shots to defeat the Columbus Blue Jackets 4-1. Bryan Rust had a goal and an assist for the 14-8-4 Penguins. Johnny Gaudreau scored for the Blue Jackets, who fall to 8-14-2.

SPECTOR’S NOTE: Some good news for the Penguins as defenseman Kris Letang skated yesterday morning in full gear for the first time since suffering a minor stroke last week. There’s still no timetable for his return.

The New Jersey Devils picked up their 10th home win of the season by blanking the Chicago Blackhawks 3-0. Vitek Vanecek got the shutout by stopping 24 saves while Dougie Hamilton led the way with a goal and two assists as the Devils (21-4-1) vaulted into first place in the overall standings with 43 points. The Blackhawks (7-14-4) sink to second-last in the overall standings with 18 points.

Detroit Red Wings goaltender Ville Husso made 44 saves, including 28 in the third period, as his club doubled up the Tampa Bay Lightning 4-2. Andrew Copp and Filip Hronek each had two assists as the Wings improved to 13-7-5 while the Lightning (15-9-1) got goals from Steven Stamkos and Brayden Point.

SPECTOR’S NOTE: This was the first game in Tampa Bay for former Lightning assistant coach Derek Lalonde, who was hired by the Wings as head coach during the offseason.

Winnipeg Jets forwards Mark Scheifele and Kyle Connor each scored twice to down the Florida Panthers by a score of 5-2. Connor Hellebuyck picked up the win for the Jets (16-7-1) with a 39-save performance. The Panthers fell to 12-10-4.

SPECTOR’S NOTE: The Jets spoiled the homecoming of Panthers head coach Paul Maurice, who was returning to Winnipeg for the first time since stepping down as the Jets bench boss a year ago.

The St. Louis Blues ended a four-game losing skid with a 7-4 win over the New York Islanders. Thomas Greiss made 36 saves and Noel Acciari scored twice as the Blues improved to 12-14-0. Zach Parise and Noah Dobson each had a goal and an assist for the 16-11-0 Islanders.

SPECTOR’S NOTE: The Blues went into this game without Torey Krug and Pavel Buchnevich. Krug has an upper-body ailment while Buchnevich has a lower-body injury. No word yet as to how long they could be sidelined.

Two goals within seven seconds by Cole Caufield and Josh Anderson in the second period powered the Montreal Canadiens to a 4-2 victory over the Seattle Kraken. Jake Allen stopped 31 shots as the Canadiens improved to 13-11-2. Rookie Shane Wright tallied his first career NHL goal for the 15-7-3 Kraken.

An overtime goal by Ryan Strome lifted the Anaheim Ducks over the Carolina Hurricanes 4-3. John Gibson made 34 saves for the Ducks (7-17-3) while Pyotr Kochetkov stopped 26 shots for the 14-6-6- Hurricanes.

CBC NEWS: Carey Price issued a statement yesterday saying he was aware of the anniversary of the 1989 Polytechnique Massacre in Montreal after the Canadiens claimed he was unaware of it. Price and the Canadiens were responding on Monday to a social media post by the goaltender supporting a guns rights group that recently used “POLY” as a promotional discount code.

Price’s initial social media post was in support of the group’s opposition to an upcoming Canadian government bill that could put restrictions on hunting rifles. He said he was unaware of the group’s use of the offensive promo code and didn’t support it.

On Tuesday, Price apologized for the timing of his original post. He said that he would never cause any intentional pain to victims of gun violence.

SPECTOR’S NOTE: The Canadiens really aren’t very good at handling controversial issues that arise involving one of their players. Rather than face the issue and address it honestly, they tried to give Price an out by denying his awareness of the Polytechnique Massacre and its upcoming anniversary. Not a good look for the storied franchise.