NHL.COM: Buffalo Sabres forward Tage Thompson scored five goals as his club crushed the Columbus Blue Jackets 9-4. Thompson tied an NHL record with four goals in the first period and tied a franchise record for the most goals in one game. Alex Tuch had four points while Rasmus Dahlin and Dylan Cozens each had three points as the Sabres improved to 12-13-1. Patrik Laine and Gustav Nyquist each tallied twice for the Blue Jackets as they fell to 8-15-2. 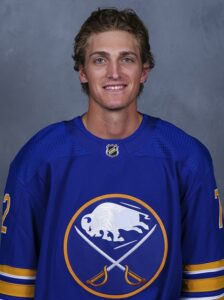 SPECTOR’S NOTE: Thompson’s six points on the night vaulted him into fourth place among this season’s top-10 scorers with 40 points. Dahlin, meanwhile, sits second among defensemen with 32 points. The Sabres currently lead the league in goals-per-game average (4.00) but their 3.69 goals-against per game is the fifth-highest. They’ll rise higher in the standings if they can improve the latter without sacrificing the former.

Edmonton Oilers captain Connor McDavid became the player this season to reach the 50-point plateau in an 8-2 thrashing of the Arizona Coyotes. McDavid had two goals and two assists while Ryan Nugent-Hopkins scored twice and collected an assist for the 15-12-0 Oilers. Christian Fletcher collected two assists for the Coyotes (7-13-4) as they’re winless in their last six games.

SPECTOR’S NOTE: Oilers winger Jesse Puljujarvi was held scoreless in this game. On Tuesday, the 24-year-old winger told a Finnish journalist that he’s not sure that he can be a scorer at the NHL level. “Twenty games in and I have one goal. It’s sad,” said Puljujarvi. “I’ve been thinking a lot about how to do things differently. Right now, I just don’t have the answer.”

Washington Capitals captain Alex Ovechkin now sits 99 goals behind Wayne Gretzky’s career record of 894 after tallying two empty-netters in a 4-1 win over the Philadelphia Flyers. Ovechkin had 795 career goals while his Capitals improved their record to 12-12-4. Kevin Hayes replied for Philadelphia (9-13-15). Flyers winger James van Riemsdyk returned to the lineup after missing the last 20 games with a broken index finger.

SPECTOR’S NOTE: Flyers winger Travis Konecny took issue with how Ovechkin scored his second empty-netter and the two jostled along the boards. Following the game, Konecny explained that he thought the Capitals winger was deking the puck and putting it on his backhand. “Maybe it wasn’t as bad as I thought,” he said. Ovechkin shrugged off the incident. “They have character. They’re a good bunch of guys,” he said, chalking up Konecny’s actions to frustration over the Flyers’ loss.

SPECTOR’S NOTE: Golden Knights defenseman Alex Pietrangelo remains sidelined as he’s dealing with an illness in his family. There is no timetable for his return.

The Boston Bruins got a 23-save shutout from Linus Ullmark to blank the Colorado Avalanche 4-0. Taylor Hall scored twice as the Bruins (21-3-1) regained first place in the overall standings with the New Jersey Devils. Both clubs have 43 points but the Bruins hold a game in hand.

SPECTOR’S NOTE: The Bruins played well and deserved this win but I think this game (and the one the two clubs played on Dec. 3) would’ve been more closely contested if the Avalanche roster wasn’t depleted by injuries. Nathan MacKinnon, Gabriel Landeskog, Valeri Nichushkin, Josh Manson, Artturi Lehkonen, Bo Byram and Evan Rodrigues are among the notables missing from their lineup for this contest.

The Calgary Flames improved their record to 13-10-3 with a 5-3 win over the Minnesota Wild. Tyler Toffoli scored twice while Elias Lindholm and Rasman Andersson each had three points. Minnesota winger Kirill Kaprizov scored for the seventh straight game while extending his points streak to 13 games. The Wild are 13-10-2 on the season.

An overtime goal by Elias Pettersson lifted the Vancouver Canucks over the San Jose Sharks by a score of 6-5. Dakota Joshua tallied twice for the Canucks as they reach .500 for the first time this season with a record of 12-12-3. Tomas Hertl and Logan Couture each collected two points for the 8-16-5 Sharks.

SPECTOR’S NOTE: The Canucks have won three straight games in overtime with Pettersson scoring the game-winner in two of those contests. With 27 points, they’re two points out of a wild-card berth in the Western Conference.

TSN: The Seattle Kraken will release center Shane Wright to play for Team Canada at the upcoming World Junior Championship in Halifax and Moncton.

PITTSBURGH HOCKEY NOW: Penguins prospect Sam Poulin is taking a leave of absence from the club’s AHL affiliate in Wilkes-Barre/Scranton for personal reasons.

NHL.COM: The Carolina Hurricanes have assigned defenseman Dylan Coghlan to the AHL affiliate in Chicago on a conditioning stint.

CHICAGO SUN-TIMES: Blackhawks goaltending coach Jimmy Waite suggests deflections and tip-in are partly responsible for the rise in scoring and the decline in save percentage. The league’s 6.4 goals-per-game average is the highest since 1994 while the league save percentage (.904) is the lowest since 2006.

SPECTOR’S NOTE: Waite pointed out that teams are driving to the net more and generating more traffic in front of goaltenders. However, I believe that’s just one factor contributing to the rise in goal scoring.

The overall caliber of goaltending also seems to be in a decline, though it could also be attributable to players being more creative now with their shots and passing. Most goalies favor the “butterfly style” to take away the bottom of the net. In recent years, however, we’ve seen players shooting higher on goaltenders more often and also attempting more shots from difficult angles.