Could the Leafs’ William Nylander end up pricing himself out of Toronto? What’s the latest on the Blue Jackets? Find out in today’s NHL Rumor Mill.

NYLANDER COULD PROVE TOO EXPENSIVE FOR THE LEAFS TO RE-SIGN

TORONTO STAR/THE ATHLETIC: Nick Kypreos and Jonas Siegel recently examined the effect that William Nylander’s ongoing improvement will have on the Maple Leafs’ efforts to re-sign him when his contract expires in 2024. 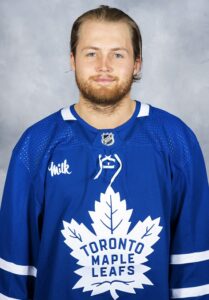 With 33 points in 31 games, the 26-year-old winger is on pace to exceed last season’s career-best performance of 34 goals and 80 points. His current average annual value is over $6.96 million and he’ll be eligible for unrestricted free-agent status in July 2024. The Leafs can open contract extension talks on July 1, 2023.

Both pundits believe Nylander’s next contract will also be affected by how much Boston Bruins winger David Pastrnak gets on his new deal next summer.

Siegel feels Nylander is making his case as an essential part of the Leafs’ roster now and in the future. Kypreos points out that Auston Matthews is due for a new contract at the same time and will likely get between $14.5 million and $15 million annually. He feels Nylander could be in line for north of $10 million annually. If the Leafs believe they can’t afford that, he thinks they could trade him before July 2024.

SPECTOR’S NOTE: Nylander isn’t going anywhere this season, of course. He’s invaluable to the Leafs’ hopes of finally staging a run at the Stanley Cup. Nevertheless, he’s going to be an expensive re-signing. Like Matthews, his future in Toronto will become a hot topic in Leafs Nation starting on July 1.

Nylander and Matthews could take up a combined $25 million of cap space starting in 2024-25. Even with the salary cap expected to rise to $88 million by that season, that’s still a big chunk of change, especially when the Leafs also have $31.5 million already invested in that season.

THE COLUMBUS DISPATCH: Brian Hedger believes the struggling Blue Jackets could become popular at the March 3 trade deadline. He speculated there is potential for general manager Jarmo Kekalainen to make multiple deals involving established players for draft picks and/or prospects.

Portzline believes re-signing Gavrikov should be the Blue Jackets’ priority. If that’s not possible, he thinks the 27-year-old defenseman could fetch a late first-round draft pick from a playoff contender.

He also believes they should keep Nyquist around if he’s willing to accept a pay cut. Otherwise, they might be able to get a second-rounder for him in the trade market. Korpisalo could bring in a second or third-round pick depending on his performance between now and deadline day.

SPECTOR’S NOTE: Gavrikov’s solid all-around game will make him an enticing trade chip if the Blue Jackets decide to move him. They shouldn’t have much difficulty finding a playoff club willing to part with a first-rounder.

The Edmonton Oilers could be among the suitors. Portzline’s colleague Daniel Nugent-Bowman noted that the Anaheim Ducks’ John Klingberg and the Montreal Canadiens’ Joel Edmundson have been linked to the Oilers in the rumor mill. However, he believes Gavrikov would be a better option for them. Nugent-Bowman also thinks the Arizona Coyotes’ Jakob Chychrun would be a good fit.

← NHL Morning Coffee Headlines - December 17, 2022 NHL Morning Coffee Headlines - December 18, 2022 →
We use cookies on our website to give you the most relevant experience by remembering your preferences and repeat visits. By clicking “Accept”, you consent to the use of ALL the cookies.
Do not sell my personal information.
Cookie SettingsAccept
Manage consent