The Wild’s Mats Zuccarello sets a franchise record, the league considers expanding its schedule from 82 to 84 games and more in today’s NHL Morning Coffee Headlines.

NHL.COM: Minnesota Wild winger Mats Zuccarello became the oldest player in franchise history to tally a hat trick in a 4-1 victory over the Chicago Blackhawks. The 35-year-old Zuccarello finished the night with four points while linemate Kirill Kaprizov had a goal and two assists for the Wild (17-11-2). Jonathan Toews scored for the Blackhawks (7-18-4), who sit at the bottom of the overall standings with 18 points. 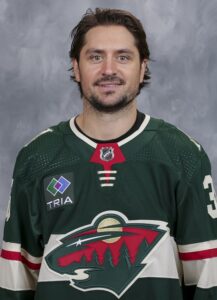 The St. Louis Blues got two goals from Jordan Kyrou to beat the Calgary Flames 5-2. Thomas Greiss kicked out 41 shots as the Blues (15-15-1) picked up their third straight win. Rookie defenseman Connor Mackey scored both goals for the Flames (13-12-6), who’ve won just four of their last 10 games. Flames winger Milan Lucic returned to the lineup after being a healthy scratch in their last three games.

Arizona Coyotes winger Clayton Keller scored twice as his club held off the New York Islanders by a score of 5-4. Nick Schmaltz collected three assists and Jakob Chychrun had two helpers for the 10-14-4 Coyotes. The Islanders drop to 17-13-1 and have lost six of their last eight games. Isles forwards Kyle Palmieri and Anthony Beauvillier returned to the lineup after being sidelined by injuries.

ESPN.COM: Greg Wyshynski reports sources claim the NHL is considering expanding its schedule from 82 to 84 games to create more regional rivalry matchups. The league has been considering alternatives to its current schedule after some teams complained about an imbalanced number of games against rivals.

SPECTOR’S NOTE: This is of course to generate more revenue but it’s not the worst idea I’ve heard. The NHL previously played 84-game schedules in 1992-93 and 1993-94. It would be the simplest solution to provide teams with more games against divisional rivals while ensuring every team plays in all 32 arenas.

The fact that long-time rivals like the Rangers and Islanders only face each other three times is ridiculous, especially when both clubs are playoff contenders and each game could have implications for potential postseason placement. On the other hand, the Rangers facing the struggling Flyers more than three times this season might not be as strong a draw.

DETROIT HOCKEY NOW: Jakub Vrana has been reinstated from the NHL/NHLPA Player Assistance Program and has returned to the Red Wings. He was back at practice yesterday as were Dylan Larkin and Filip Hronek, who had suffered injuries earlier in the week.

NHL.COM: Dallas Stars winger Mason Marchment was fined $2,000.00 by the department of player safety for embellishment during a Dec. 8 game against the Ottawa Senators.