Does Anyone Really Care About The NHL All-Star Game?

Last week, the NHL announced its 32 players (one from each club) as its initial selections for the 2023 All-Star Game in Sunrise, Florida, on Feb. 4. The fans will get to vote on three other players from each division to round the All-Star rosters.

Following the announcement, Philadelphia Flyers head coach John Tortorella was asked what he thought about Flyers forward Travis Konecny not being named to the Metropolitan Division lineup.

“I don’t even worry about that s**t,” replied Tortorella. “The whole team, the whole weekend, I don’t even watch it. I think it’s turned into a …well, I’ll just leave it at that. I really don’t care.”

It wouldn’t be shocking if most NHL coaches and players share Tortorella’s opinion about the All-Star Game. I can’t speak for other pundits, bloggers or hockey fans but I stopped caring about it a long time ago.

The last NHL All-Star Game that drew my interest was in 2016. That was the year when the fans, irrepressible scamps that you are, voted for long-time enforcer John Scott to be part of the Pacific Division roster. 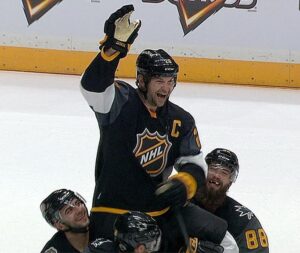 NHL HQ attempted to prevent Scott, then a member of the Arizona Coyotes, from participating in its All-Star Game. After declining to bow out when asked to do so by the league and the Coyotes, he was demoted to the Coyotes’ AHL affiliate and then traded to the Montreal Canadiens, who immediately sent him to their AHL club.

That prompted a considerable outcry from fans and pundits about a conspiracy to keep Scott out of the All-Star Game, garnering headlines and becoming an embarrassment for the NHL. The league eventually relented and it became one of the feel-good sports stories of the year.

Supported by his All-Star teammates and opponents, Scott stole the show. He scored two goals in the tournament and captained the Pacific Division to the All-Star championship. He was also named tournament MVP as a write-in candidate and received a standing ovation from the fans.

Since then, the league has taken steps to ensure the fans don’t stuff the ballot box with other write-in candidates it considers unworthy of participating in its All-Star showcase.

The fact that Scott’s story made the 2016 NHL All-Star Game the most memorable and entertaining in years spoke volumes about the irrelevance of this annual event.

It’s been decades since the NHL All-Star Game mattered. Players have stopped taking it seriously, preferring not to risk injury in a meaningless contest. Most of them seem to look forward to the All-Star break as a welcome midseason break in a long, grueling 82-game schedule.

Those not selected for the game take the opportunity to head to sunny climes with family and friends for a little vacation. In the not-too-distant past, some of those chosen to participate tried to back out until the league began threatening multi-game suspensions for those who failed to show up for reasons other than injury or family emergencies.

Over the past three decades, the NHL has tried different formats to make the game more entertaining while providing players more incentive to take them seriously. The amount of money awarded to the winning team was significantly increased. Skills competitions the day prior to the game have become a staple of the All-Star weekend.

While some of these changes have sparked varying degrees of curiosity from fans, it really hasn’t improved the quality of play once the puck drops on the All-Star game itself. It remains glorified pond hockey with bloated scores and little defensive effort.

When the players don’t care, why should the fans?

Whatever city hosts the NHL All-Star Game seems to get some benefit from it as local fans turn out to see all the league’s best players in one place at the same time. None of this, however, generates much of a television audience in Canada and the United States compared to the all-star contests of professional baseball or basketball.

The NHL won’t scrap this event, of course. If it’s to be taken seriously as a major North American sports league it needs an all-star game to showcase its best talent. At least, that’s the story it seems to tell itself.

Most hockey fans probably wouldn’t miss the All-Star Game if it one day disappeared forever from the NHL calendar. Few lamented its absence whenever it was canceled by lockouts, pandemics, or the Olympics. It’s unlikely there would be many tears shed if this year’s event didn’t take place except for those who paid to go see it.

When it comes to NHL All-Star competitions, hockey fans seem to prefer international tournaments such as the Winter Olympics or the World Cup of Hockey. Those games are more meaningful because there’s a lot more on the line.

Until those events come around again, we’re stuck with a meaningless spectacle played by disinterested All-Stars that only strikes a chord with fans whenever there are shenanigans with the selection process.

← NHL Morning Coffee Headlines - January 9, 2023 NHL Rumor Mill - January 9, 2023 →
We use cookies on our website to give you the most relevant experience by remembering your preferences and repeat visits. By clicking “Accept”, you consent to the use of ALL the cookies.
Do not sell my personal information.
Cookie SettingsAccept
Manage consent