Recaps of Friday’s games, why Phil Kessel is poised to break the league Ironman record, the Panthers sign Eric Staal, an update on Jake Guentzel, and more in today’s NHL Morning Coffee Headlines.

NHL.COM: Brayden Point scored the game-tying goal in the third period and the game-winner in overtime to lift the Tampa Bay Lightning over the Florida Panthers 3-2. Steven Stamkos also scored for the Lightning, extending his season-opening goal streak to five games and his league-leading total to seven goals. Matthew Tkachuk and Rudolfs Balcers replied for the Panthers. 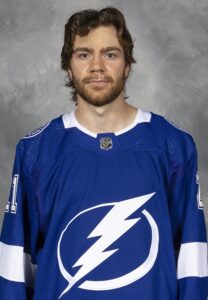 The Seattle Kraken upset the Colorado Avalanche 3-2 as Karson Kuhlman broke a 2-2 tie in the third period. Jaden Schwartz and Jared McCann gave the Kraken a 2-0 lead but the Avs tied it on goals by Evan Rodrigues and Bowen Byram.

An overtime goal by Max Domi gave the Chicago Blackhawks a 4-3 win over the Detroit Red Wings. The Blackhawks overcame a 3-1 deficit on third-period goals by Philipp Kurashev and Connor Murphy.

SPECTOR’S NOTE: It was a costly win for Chicago as goaltender Petr Mrazek left the game with an undisclosed injury following the second period. Blackhawks defenseman Jake McCabe made his season debut after recovering from cervical spine surgery that he underwent in September.

THE SCORE: Vegas Golden Knights winger Phil Kessel is poised to equal the NHL’s 989-game Ironman record held by Keith Yandle on Monday against the Toronto Maple Leafs. He can break that record the following night against the San Jose Sharks.

John Matisz and Nick Faris interviewed teammates from each of Kessel’s career stops in the NHL as well as his junior and college years to determine how the 35-year-old winger reached this point.

SPECTOR’S NOTE: This is a fascinating and insightful look at how Kessel reached this stage in his career. Reticent with the media but outgoing with teammates, the quirky winger’s chunky body doesn’t look like today’s typical NHL player. However, he’s a classic example of the old saying, “You can’t judge a book by its cover.” Kessel is also on the verge of scoring his 400th career NHL goal and has 957 career points.

FLORIDA HOCKEY NOW: Eric Staal is back as an NHL player, signing a one-year contract worth $750K with the Panthers. He joined the club on a professional tryout offer during training camp. Staal, 37, played four games last season with the AHL’s Iowa Chop and also skated for Canada’s Men’s Hockey team at the 2022 Beijing Winter Olympics.

PITTSBURGH HOCKEY NOW: Penguins winger Jake Guentzel didn’t participate in practice on Friday but traveled with the club to Columbus where they’ll face the Blue Jackets on Saturday. He suffered an upper-body injury during Thursday’s game against the Los Angeles Kings but head coach Mike Sullivan said it wasn’t a concussion.

TORONTO SUN: Wayne Simmonds is expected to make his season debut on Saturday against the Winnipeg Jets. The 34-year-old winger cleared waivers earlier this month but has skated with the Leafs’ injured players.

SPECTOR’S NOTE: This could also be an opportunity for the Leafs to showcase Simmonds for a trade. They’ve informed the other clubs that he’s available and they aren’t concerned about the return, hoping instead to do right by the winger by finding a suitable destination for him.

TSN: The Minnesota Wild placed defenseman Andrej Sustr on waivers. Meanwhile, the Kraken bought out the contract of blueliner Michal Kempny after he was placed on unconditional waivers.