THE DENVER POST/COLORADO HOCKEY NOW: The Colorado Avalanche held their Stanley Cup victory parade on June 30 in Denver. During the parade, defenseman Bowen Byram briefly jumped from the fire truck he was riding to mingle with fans along the route. He was nearly prevented from rejoining his teammates by a policeman who thought he was one of the fans.

In other highlights, head coach Jared Bednar gave an emotional speech thanking the Avalanche organization for giving him the opportunity to prove himself at the NHL level. He also praised his players and fellow coaches and thanked the fans for sticking with the club after his difficult first season in 2016-17.

Cale Makar thanked his “underappreciated” defense partner Devon Toews, Mikko Rantanen apologized for “forgetting” how to speak English following the Cup win and drank from a shoe with Artturi Lehkonen, and Nathan MacKinnon joked about finally winning something in his ninth NHL season.

SPECTOR’S NOTE: In short, a good time was had by all.

SPORTSNET: Elliotte Friedman cites multiple sources claiming the Tampa Bay Lightning are working on a trade with Ryan McDonagh. It’s not a move they want to make but may have to for salary cap reasons. The 33-year-old defenseman is signed through 2025-26 with an annual average value of $6.75 million and a full no-trade clause. 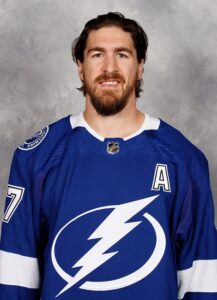 SPECTOR’S NOTE: McDonagh is still an effective defenseman but won’t be easy to move given his age and contract. The Bolts might have to include a draft pick or prospect to make the deal work.

They’ve also got less than two weeks to pull this off. Free agency begins on July 13 and most teams with available cap space interested in acquiring McDonagh could consider more affordable free-agent options if trade talks fall through.

TSN: Darren Dreger reports that the Lightning are closing in on a multi-year contract with Nick Paul. The 27-year-old forward was acquired from the Ottawa Senators prior to the March 21 trade deadline.

SPECTOR’S NOTE: Paul’s new contract could be one reason why the cap-strapped Lightning are trying to trade McDonagh. He fit in well with the Bolts, especially during the postseason. He reportedly rejected a four-year, $10-million contract offer from the Senators before he was traded. It’ll be interesting to see what he gets from the Lightning.

DETROIT HOCKEY NOW: The Red Wings have hired Derek Lalonde as their new head coach. He spent the past four seasons as an associate coach with the Lightning and is a former ECHL coach of the year.

SPECTOR’S NOTE: We shouldn’t be surprised that Wings general manager Steve Yzerman went with a former Lightning coach. He’s the one who hired Lalonde during his tenure as the Bolts GM.

SPECTOR’S NOTE: A formal announcement could come as early as today (July 1). Montgomery spent the past two seasons as an assistant coach with the St. Louis Blues.

WINNIPEG SUN: The Jets are reportedly targeting Rick Tocchet as their new head coach. They’ve made him an offer but a deal had yet to be finalized. Tocchet is a former head coach of the Lightning and the Arizona Coyotes.

TSN: The Buffalo Sabres signed goaltender Craig Anderson to a one-year, $1.5 million contract. He was slated to become a UFA on July 13.

THE COLUMBUS DISPATCH: The Blues Jackets acquired gritty forward Mathieu Olivier from the Nashville Predators in exchange for a 2022 fourth-round pick that the Jackets acquired from the Toronto Maple Leafs last year.

SPORTSNET: Ottawa Senators defenseman Victor Mete released a statement on social media yesterday indicating he was not present at the Hockey Canada gala in 2018 that is now the focus of sexual assault allegations.

Mete, a member of Canada’s World Junior team in 2017-18, said he was deeply troubled by the allegations. He indicated he was vacationing in Jamaica with his family at the time of the alleged incident and only learned about the situation recently through media reports. He added he’d be willing to fully cooperate if requested by those investigating the matter.

WASHINGTON HOCKEY NOW: The Capitals have promoted Emily Engel-Natzke as their new NHL video coordinator. She becomes the first woman to be hired as part of the full-time coaching staff of an NHL club.

← NHL Rumor Mill - June 30, 2022 NHL Rumor Mill - July 1, 2022 →
We use cookies on our website to give you the most relevant experience by remembering your preferences and repeat visits. By clicking “Accept”, you consent to the use of ALL the cookies.
Do not sell my personal information.
Cookie SettingsAccept
Manage consent