NHL.COM: Boston Bruins goalie Linus Ullmark stopped 30 shots for his first shutout of the season in a 4-0 victory over the Columbus Blue Jackets, dropping the latter’s record to 3-6-0. David Pastrnak had a goal and an assist to move into first place in the NHL scoring race with 17 points while the Bruins lead the league with a record of 8-1-0. 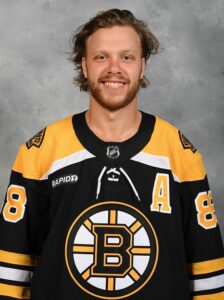 SPECTOR’S NOTE: Brad Marchand took a scheduled game off from this one after making his season debut on Thursday. He underwent double hip surgery in May.

Vegas Golden Knights goaltender Logan Thompson made 29 saves for his league-leading second shutout of the season to blank the Anaheim Ducks 4-0. Reilly Smith and William Karlsson each had a goal and an assist for the Golden Knights, who are 7-2-1 thus far this season. The Ducks, meanwhile, fell to 1-6-1.

New York Islanders winger Josh Bailey scored in his 1,000th career NHL game in a 6-2 victory over the Carolina Hurricanes. Brock Nelson tallied twice and Ilya Sorokin made 33 saves for the Islanders, who improved their record to 4-4-0. Brent Burns scored his first goal for the Hurricanes, who are 4-2-1 in their first seven games.

An overtime goal by Blake Wheeler gave the Winnipeg Jets a 3-2 victory over the Arizona Coyotes, spoiling the latter’s home opener at the 5,000-seat Mullet Arena in Tempe. The Coyotes (2-4-1) opened the scoring on two goals by Christian Fischer but the Jets (5-3-0) rallied on goals by Cole Perfetti and Mark Scheifele to set the stage for Wheeler’s winner.

Vancouver Canucks captain Bo Horvat scored twice to lead his club over the Pittsburgh Penguins 5-1. Spencer Martin turned aside 34 shots to give the Canucks their second win of the season (2-5-2) while the Penguins (4-3-1) have dropped three straight games.

The New Jersey Devils got a 24-save shutout from Vitek Vanecek and a goal from Jack Hughes to upset the Colorado Avalanche 1-0. The win moves the Devils to 5-3-0 while the Avs drop to 4-3-1. The Avalanche were without winger Valeri Nichushkin, who is listed as day-to-day with a lower-body injury.

THE NEWS & OBSERVER: The Carolina Hurricanes traded defenseman Ethan Bear and prospect forward Lane Pederson to the Vancouver Canucks in exchange for a fifth-round pick in 2023. The Hurricanes also retained 18 percent of Bear’s $2.2 million salary for this season.

SPECTOR’S NOTE: This move wasn’t unexpected. The Hurricanes had been shopping Bear for several weeks as he became the odd man out on their deep defense corps. The Canucks were in the market for a right-side defenseman and were reportedly quite interested in Bear.

NEW YORK POST: Rangers center Filip Chytil has resumed practicing with his teammates but is still expected to miss the next two games with what is believed to be a head injury.

OTTAWA SUN: Senators defenseman Artum Zub is out for one-to-two weeks with an upper-body injury.

The Islanders’ Semyon Varlamov expected to miss the start of the season, Wild owner discusses his club’s buyouts of Zach Parise and Ryan Suter, the Sharks prepare to start the season without Evander Kane, and more in today’s NHL morning coffee headlines.

THE ATHLETIC: Arthur Staple reports an undisclosed injury could sideline New York Islanders starting goaltender Semyon Varlamov for the upcoming start of the season. It’s uncertain if Varlamov’s condition is tied to a nagging knee injury that hampered him during the 2021 playoffs. His absence would mean Ilya Sorokin becomes the Isles’ start with Cory Schneider as his backup. 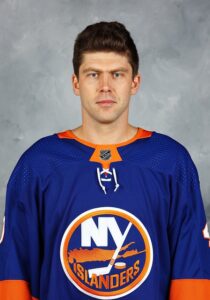 SPECTOR’S NOTE: Varlamov wouldn’t be the only noteworthy starter expected to miss the start of this season. Montreal’s Carey Price will also reportedly remain sidelined when the schedule begins next week. Speaking of the Canadiens…

NHL.COM: Bad news for Los Angeles Kings’ Quinton Byfield as the 19-year-old center was diagnosed with a fractured left ankle suffered during Tuesday’s preseason loss to the Arizona Coyotes. He’s been placed on injured reserve and sidelined indefinitely.

SPECTOR’S NOTE: An unfortunate setback for Byfield. Selected second overall in the 2020 NHL Draft, he was hoping to garner a full-time roster spot with the Kings this season.

THE SCORE: New York Rangers enforcer Ryan Reaves is day-to-day with an injured left leg after his skate was clipped by New Jersey Devils defenseman P.K. Subban as they went into the corner chasing a loose puck. Reaves had to be helped off the ice.

THE ATHLETIC: Minnesota Wild owner Craig Leipold told Michael Russo he supported general manager Bill Guerin’s decision to buy out winger Zach Parise and defenseman Ryan Suter this summer. However, he expressed no regrets about signing the duo to their 13-year contracts back in 2012.

“It totally changed our franchise,” said Leipold. “We went from not selling any tickets and having a future that looked bleak to overnight being a sellout team for the next five, six years.”

SPECTOR’S NOTE: The additions of Parise and Suter didn’t translate into a Stanley Cup for the Wild but Leipold’s right about how much they improved the franchise. Before they joined the Wild, the club reached the playoffs just four times in 11 seasons. With Parise and Suter in the lineup, they qualified for the postseason eight times in nine seasons.

THE MERCURY NEWS: San Jose Sharks head coach Bob Boughner said his club is preparing to start the season without Evander Kane in the lineup. The 30-year-old winger has been out of the lineup while under investigation by the league regarding allegations of spousal abuse and using a fake COVID-19 vaccination card.