​The NHL and NHLPA formally approve a 56-game season, the Blues will reportedly name Ryan O’Reilly as team captain, and more in today’s morning coffee headlines

The league’s aim is to return to a normal hockey calendar for the 2021-22 season.

Both sides intend to be flexible and adaptable to ensure compliance with local and national health and safety directives for their players and game-related personnel. 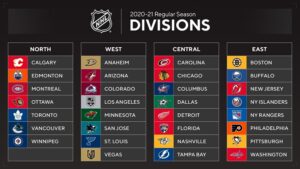 The league will be split into four divisions (see chart at left) for this season with no conferences. Training camp open for last season’s seven non-playoff teams on Dec. 31. The rest of the league begins camp on Jan. 3. There won’t be any exhibition games.

The playoffs will feature 16 teams in a best-of-seven, four-round format that will conclude no later than July 15. The top-four teams in each division will qualify, featuring intradivisional matchups in the first two rounds (1 vs 4, 2 vs 3). The two semifinal winners will face off in the Stanley Cup Final.

Frank Seravalli reports multiple provincial health authorities in Canada have not yet signed off on the league’s plan and protocol amid concerns over rising COVID-19 rates in several provinces. Discussions between the league and the provinces are expected to continue this week. If no agreement is reached, the seven Canadian teams could begin the season in a hub city such as Edmonton or in US cities.

Several US teams, such as the Dallas Stars, Florida Panthers and Tampa Bay Lightning, are expected to begin the season with a limited number of fans in their arenas.

The San Jose Sharks announced they will train and open the season in Arizona due to the ban on mass gatherings in Santa Clara County, California.

SPECTOR’S NOTE: The NHL is making this change to the divisions and playoff format for this season only. Nevertheless, it’ll be interesting to see how fans respond to these changes. If the reaction is positive, perhaps the league would consider adopting them going forward.

The critical dates are as follows:

May 8: End of the regular season,

SPECTOR’S NOTE: Some of those regular-season and playoff dates could change depending on the course of the pandemic. The league intends to leave some wiggle room in the schedule for games postponed by the pandemic. The NHL Draft could be staged in Montreal as that’s where this year’s draft was supposed to be held.

SPORTSNET: Chris Johnston reports the Canadian teams will face off against each other 10 times in the upcoming season.

Health authorities in British Columbia have raised the most concerns over the NHL’s plan, while Ontario and Quebec have yet to formally commit. Alberta and Manitoba are believed most comfortable with the plan while Quebec Premier Francois Legault expressed his happiness – “Bonne nouvelle! (Good news!) – following yesterday’s announcement by the league.

SPECTOR’S NOTE: The Vancouver Canucks seem most likely to be starting this season playing in another city. Ontario is going into a month-long province-wide lockdown on Christmas eve, which could force the Ottawa Senators and Toronto Maple Leafs into a hub city in Edmonton. It remains to be seen what Quebec will do. The teams in those provinces could be allowed to return to their arenas if restrictions ease over the course of the season. We’ll probably learn more before the end of this week.

Johnston’s colleague Elliotte Friedman reports training camp will consist of 36 players and an unlimited number of goaltenders. He also indicates no-movement clauses are extended through July. That will allow players who have one to use it if they wish during the expansion draft. The entry-level slide for rookies drops this season from 10 games to seven.

PUCKPEDIA: examines some interesting aspects of the transition rules for the coming season and the effects upon the salary cap for 2020-21.

THE MERCURY NEWS: San Jose Sharks general manager Doug Wilson confirmed some of the team’s players skating in Europe in recent months tested positive for COVID-19. However, none who trained in San Jose tested positive. They’re not aware of any player currently prevented by the coronavirus from traveling to North America.

THE ATHLETIC: Jeremy Rutherford cites sources claiming Ryan O’Reilly will be named the new captain of the St. Louis Blues. He will replace Alex Pietrangelo, who signed with the Vegas Golden Knights in October.

SPECTOR’S NOTE: O’Reilly is a perfect choice for team captain. As Rutherford points out, he’s become a leader and a core player since joining the Blues in 2018. He won the Conn Smythe Trophy as the Blues won the 2019 Stanley Cup and the Selke Trophy in 2019.

The latest speculation on how the NHL’s schedule pause could affect the playoff schedule and the salary cap in today’s rumor roundup.

SPORTSNET: Elliotte Friedman examined some of the biggest questions facing the NHL after pausing its season over coronavirus concerns.

Noting how the NHL, NBA and Major League Soccer announced their temporary media guidelines this week at the same time, he believes they’re getting the same medical information and are in communication with each other. He suspects resumption of their respective seasons could also occur at the same time.

THE ATHLETIC: Scott Powers and Mark Lazerus report NHL commissioner Gary Bettman told the board of governors on Thursday that canceling the regular season would cost the league a whopping $1 billion. The hope is to return to work on April 15, stage a one-week mini-training camp, finish out the regular season followed by a possible shortened playoff schedule that ends in July, though that might not be possible.

Aaron Portzline reports there’s a belief the NHL season is over for clubs with no chance of reaching the playoffs. SPECTOR’S NOTE: Friedman notes NBA commissioner Adam Silver announced the pause for his schedule was 30 days. I suspect the NHL and MLS will follow suit. Barring any improvement in containing and reducing the COVID-19 coronavirus, the earliest the NHL returns to action could be April 12, though that it wouldn’t surprise me if it’s later than that.

Unless the coronavirus is still raging through North America until June, I expect we’ll see some form of a shortened regular-season schedule, perhaps even just a “play-in” for the playoff bubble clubs, following by the first two rounds of the playoffs being best-of-five and the Conference Finals and Stanley Cup Final being best-of-seven.

Friedman reports the NHL could see a $1 billion hit to hockey-related revenue because of this schedule pause. That could result in the salary cap dropping below the current $81.5 million, potentially hurting teams and players. He feels that’s an incentive for the NHL and NHLPA to agree to an artificial cap number for next season.

THE ATHLETIC: Craig Custance points out the financial impact of this schedule pause will affect each team differently. The NHL is more reliant on gate-driven revenue than the other major professional leagues. The average NHL clubs earns $1.7 million per game, with higher-revenue clubs earning twice that. A popular NHL club like the Toronto Maple Leafs won’t feel the effects of this pause as much as a struggling franchise like the Arizona Coyotes.

SPECTOR’S NOTE: Friedman reminded us the NHL and NHLPA agreed to an artificial salary-cap number for 2013-14 after a lockout cost half of the previous season. I daresay they’ll do the same to ensure next season’s cap at least remains at $81.5 million. There’s also talk of employing amnesty buyouts, but that probably won’t be necessary under an artificial cap that’s at or slightly above the current level.

The Stars fire head coach Jim Montgomery, the latest from the Board of Governors meetings, and more in today’s NHL morning coffee headlines.

NHL.COM: The Dallas Stars 2-0 victory over the New Jersey Devils was overshadowed by the news earlier in the day that the Stars had fired head coach Jim Montgomery for “unprofessional conduct”. Assistant coach Rick Bowness has taken over on an interim basis. Ben Bishop made 26 saves for the shutout. General manager Jim Nill didn’t shed light on Montgomery’s alleged infraction. He said there was no criminal investigation and no former or current players were connected to the incident. There was no comment from Montgomery or the Stars’ ownership. The Stars players were shocked and confused by the decision.

SPECTOR’S NOTE: Montgomery’s firing wasn’t related to the recent allegations leveled at several former NHL coaches for abusive or racist behavior. Nevertheless, there’s a puzzling lack of information behind his dismissal. It’ll be interesting to see if any further details are revealed directly or via leaks to the media.

SPECTOR’S NOTE: After looking dominant through their first 23 games, the Oilers are wobbling a bit of late, winning just four of their last 10 contests. Some Oilers fans are worried their club could be poised for another collapse as defensive and goaltending issues become a concern.

The Calgary Flames picked up their sixth straight victory by downing the Arizona Coyotes 5-2. Flames goalie Cam Talbot kicked out 46 shots for the win. Michael Frolik and Zac Rinaldo each had a goal and an assist. Earlier in the day, the Flames announced winger Matthew Tkachuk was listed as day-to-day with an upper-body injury. The Coyotes also announced defenseman Jason Demers is week-to-week with a lower-body injury.

John Tavares scored twice and set up another as the Toronto Maple Leafs rolled to a 4-1 victory over the Vancouver Canucks. Mitch Marner collected two assists. Former Leaf Josh Leivo tallied for the Canucks.

Marc-Andre Fleury made 28 saves to backstop the Vegas Golden Knights to a 5-1 win over the Chicago Blackhawks. It was Fleury’s first game since Nov. 23 after taking a leave of absence to be with his dying father. Blackhawks defenseman Calvin de Haan left the game in the first period with an injured right shoulder.

Alex Killorn scored and set up another as the Tampa Bay Lightning edged the Florida Panthers 2-1. Panthers goalie Sergei Bobrovsky made 46 saves in a losing cause.

The Montreal Canadiens scored four unanswered goals to down the Pittsburgh Penguins 4-1. Shea Weber, Brendan Gallagher, Tomas Tatar, and Joel Armia each had a goal and an assist. Penguins goalie Tristan Jarry had his franchise-record shutout streak end at 177:14.

Buffalo Sabres captain Jack Eichel extended his points streak to 14 games in a 5-2 victory over the St. Louis Blues. Eichel scored twice while teammates Sam Reinhart and Johan Larsson each tallied a goal and an assist. The Blues have lost three straight games.

Shootout goals by Rickard Rakell and Max Comtois gave the Anaheim Ducks a 3-2 win over the Minnesota Wild. Before the game, the Wild honored captain Mikko Koivu for reaching 1,000 career NHL games.

A three-goal outburst late in the second period carried the Winnipeg Jets over the Detroit Red Wings 5-1. Blake Wheeler and Andrew Copp each had a goal and an assist. The Wings are winless in their last 12 contests (0-10-2).

Los Angeles Kings netminder Jonathan Quick made 29 saves to hold off the New York Rangers 3-1. Tyler Toffoli had a goal and an assist.

SPORTSNET: The NHL won’t be staging a World Cup of Hockey tournament in 2021. The league and the NHLPA are instead focused on staging tournaments in 2024 and 2028. Discussions remain open on Olympic participation, depending on what the International Olympic Committee brings to the table.

SPECTOR’S NOTE: If the IOC agrees to cover the cost for the players’ travel, insurance, and accommodation expenses, as well as agree to share broadcasting and licensing revenue, I believe the NHL would agree to return to the Olympics.

SPECTOR’S NOTE: After years of lofty projections that fell short, it appears the league could be more conservative in their estimates for 2020-21.