​Could the Maple Leafs pursue Nick Foligno? What’s the latest on the Jets, Capitals and Penguins? Find out in today’s NHL rumor mill.

COULD THE LEAFS AFFORD NICK FOLIGNO?

TORONTO SUN: Steve Simmons took note of recent speculation claiming the Maple Leafs are seeking a forward, preferably one who can play among their top six. He said Nick Foligno of the Columbus Blue Jackets has popped up of late, but the Leafs have next to no salary-cap space. 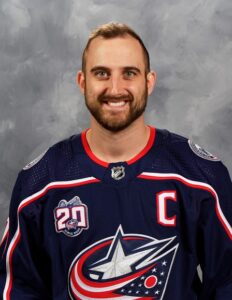 Simmons believes it would take moving “other assets and money” like Alex Kerfoot, maybe a young defenseman such as Rasmus Sandin or Timothy Liljegren or a young sniper like Nick Robertson or maybe an early draft pick to get it done.

SPECTOR’S NOTE: Cap Friendly shows the Leafs with just over $130K in projected trade-deadline cap space. Foligno, the Blue Jackets’ captain, carries a $5.5 million annual average value with $2.9 million remaining to be paid out as of today. An unrestricted free agent this summer, he also carries a 10-team no-trade list.

The Blue Jackets could consider trading Foligno if they fall further out of playoff contention leading up to the April 12 trade deadline but they’ll want a decent return. As Simmons points out, it would have to be a dollar-in, dollar-out move by the Leafs to get it done and they’ll have to include a promising player or a decent draft pick. They might have to consider more affordable options.

LATEST ON THE CAPITALS AND PENGUINS

NBC SPORTS WASHINGTON: In a recent mailbag segment, J.J. Regan was asked if he anticipated the Capitals making any moves at the trade deadline. He thinks they’ll look but their usage of long-term injury reserve to exceed the cap means they cannot bank cap space to put toward trade-deadline acquisitions.

Regan felt the Capitals must boost their depth at center and in goal. He suggested Darcy Kuemper or Antti Raanta of the Arizona Coyotes would be good targets, especially Raanta as he’s a free agent this summer. However, the Coyotes would have to absorb a fair bit of his $4.25 million annual average value.

He was also asked if the Capitals could package Evgeny Kuznetsov and something to the Buffalo Sabres for Jack Eichel but dismissed that idea. The only scenario he sees the Capitals trading Kuznetsov is if they’re engaging in a roster rebuild.

SPECTOR’S NOTE: NHL insider Bob McKenzie last week indicated the Capitals might like to add an experienced goaltender. It’ll have to be someone affordable.

As for Kuemper and Raanta, they’re not available unless the Coyotes fall out of playoff contention. Of the two, Raanta is more likely to be traded given his contract status.

THE ATHLETIC: Josh Yohe recently examined which members of the Pittsburgh Penguins are most likely to move at the trade deadline. He listed defenseman Marcus Pettersson and forward Colton Sceviour in his “I Smell A Trade” Division.

SPECTOR’S NOTE: Yohe acknowledged big changes could be coming for the Penguins under new general manager Ron Hextall and president of hockey ops Brian Burke. They could involve long-time core veterans Evgeni Malkin and Kris Letang but Yohe doubts either guy will be moved at the trade deadline.

Hextall and Burke both recently indicated they’d like to add more toughness to their lineup. Pettersson and Sceviour could be the trade chips used to bring in more muscle by deadline day.

UPDATE ON THE JETS

SPORTSNET: Ken Wiebe was asked by a reader if Winnipeg Jets GM Kevin Cheveldayoff would entertain moving Paul Stastny before the trade deadline while his stock is high. He doesn’t believe Cheveldayoff will consider doing that, citing Stastny’s value to the Jets in terms of leadership and ability to connect with his teammates. He wouldn’t be surprised if Stastny signed a one-year contract extension.

SPECTOR’S NOTE: Stastny was a perfect fit with the Jets during his previous short tenure with them. That chemistry hasn’t worn off despite his age and the decline in his skills. His versatility and leadership have given them a boost this season.

Mattias Ekholm has been linked to the Jets in recent trade speculation but I agree with Ates that Savard would be a better fit on their blueline. Whether Cheveldayoff pursues him remains to be seen.

Games recaps, stars of the week, injury updates and more in your NHL morning coffee headlines. Vincent Trocheck’s hat trick carried the Florida Panthers to a 7-5 win over the Edmonton Oilers (Photo via NHL Images).

Vincent Trocheck’s third-period hat trick powered the Florida Panthers to a 7-5 win over the Edmonton Oilers. Evgenii Dadonov also scored twice for the surging Panthers, who’ve won for the fifth time in six games. Earlier in the day, the Panthers announced the re-signing of winger Colton Sceviour to a three-year, $3.6-million contract extension.

Antti Raanta made 37 saves while Clayton Keller had a goal and an assist as the Arizona Coyotes thumped the Chicago Blackhawks 6-1, handing the latter their sixth straight defeat. Sidelined Blackhawks goaltender Corey Crawford (head injury) joined his teammates on Monday for their morning skate, but the Chicago Sun-Times‘ Mark Lazerus believes the club should shut him down for the season.

SPECTOR’S NOTE: It doesn’t sound as though Crawford is close to returning to the lineup. The fading Blackhawks are in last place in the Central Division and sit 10 points out of a playoff berth. Rushing back Crawford won’t save the season. Of course, if he’s fully recovered and itching to return to action the Hawks won’t stop him, but his return likely won’t vault Chicago back into playoff contention.

SPECTOR’S NOTE: Dropping seven of their last 10 games, the Devils are clinging to one of the two wild-card berths in the Eastern Conference. With their starting goalie still sidelined they’ll have a tough time snapping out of their skid.

CALGARY SUN: The Flames are still awaiting word as to the severity of the lower-body injury suffered Sunday by starting goalie Mike Smith.

THE ORANGE COUNTY REGISTER: The Anaheim Ducks placed center Dennis Rasmussen on unconditional waivers for the purpose of buying out his contract.

Updates on Phil Kessel, Marcus Johansson and more in this morning’s collection of NHL headlines.  END_OF_DOCUMENT_TOKEN_TO_BE_REPLACED