​More reaction to the draft lottery results, plus the latest on Bruce Boudreau, Chris Kreider, and more in today’s NHL morning coffee headlines.

THE DETROIT NEWS: Bob Wojnowski believes the Red Wings got burned by what he considers the NHL’s draft lottery buffoonery. The Wings had this season’s worst record but fell to fourth overall in the draft order as a placeholder club took the top spot in Phase 1 of the lottery draw on Friday. 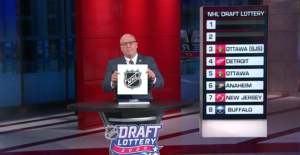 The results of the 2020 NHL Draft lottery has sparked criticism of the process (Photo via NHL.com).

“You put your fate in random acts, expect random, inexplicable results,” writes Wojnowski, going on to call the lottery “an embarrassment”. He noted the Wings had an 18.5 percent chance of winning the draft lottery, yet the odds were a combined 24.5 percent that one of the eight teams eliminated from the qualifying round of the upcoming 24-team playoff tournament would get the prize. “And here’s the ridiculous part: it’s exactly what the NHL planned to happen.”

THE TORONTO STAR: Damien Cox believes the NHL Draft hasn’t made much sense for years. He thinks Friday’s lottery results destroyed the belief that it’s about fairness of competition, allowing weaker teams an opportunity to compete with stronger clubs.

Cox suggests there’s little evidence the draft helps weaker clubs. “In most cases, they’re weak because they’re badly run,” he said. Cox makes the case for a free market system allowing the top prospects to sign with whoever they choose once they turn 18. He feels it would motivate teams to improve how they run their operations as a way to woo the best young talent.

SPECTOR’S NOTE: The anger felt by Red Wings fans over the results of the lottery is understandable, but even if this had been a normal draft year, there’s a good chance the lottery balls still wouldn’t have fallen their way. In 2017, for example, the Colorado Avalanche were the league’s worst team but dropped to fourth as the Devils won the lottery.

That’s cold comfort for the Wings and their fans, but they could still end up with a very good player, perhaps a potential superstar, with the No. 4 pick. Just like the Avs did when they selected Cale Makar three years ago.

Don’t expect the NHL to take up Cox’s suggestion to scrap the draft in favor of an open market. The last thing they want is the best prospects clustering toward a handful of clubs.

“The plan was when we signed here that this was it for me, and this is where we were going to end up. Even though I hope it’s not, it’s just tough when it goes this way.”

Boudreau has two years remaining in an advisory role with the Wild, but he doesn’t know if general manager Bill Guerin will take advantage of it.

The Coyotes expect to have their entire roster in town by Monday.

← Sunday NHL Rumor Roundup - June 28, 2020 NHL Rumor Mill - June 29, 2020 →
We use cookies on our website to give you the most relevant experience by remembering your preferences and repeat visits. By clicking “Accept”, you consent to the use of ALL the cookies.
Do not sell my personal information.
Cookie SettingsAccept
Manage consent