​How much would it cost to acquire Sabres captain Jack Eichel? How will a flat salary cap affect the Capitals? Find out in today’s NHL rumor mill.

WGR550: Joe DiBiase weighs in on the cost for interested clubs to acquire Jack Eichel. He was inspired by the recent musings from some fans and pundits over what it would take to acquire the Buffalo Sabres captain. 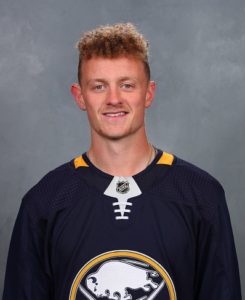 What would it cost to acquire Buffalo Sabres center Jack Eichel? (Photo via NHL Images)

DiBiase dismisses the recent talk of Eichel supposedly being frustrated with the Sabres as speculation. He believes there’s “no way in hell” the 23-year-old superstar is getting traded now. Nevertheless, he decides to show why it will be difficult for rival clubs to pry away Eichel from the Sabres.

DiBiase believes the asking price to be a young No. 1 center and something of significance. He quickly dismissed 19 of the 31 NHL clubs as lacking the necessary components to make that trade.

For the rest, here is what DiBiases believes are fair asking prices:

SPECTOR’S NOTE: Far-fetched? Outrageous? Completely unlikely to happen? You bet, but those returns make more sense than most of the Eichel trade scenarios floating around in cyberspace. Google “Eichel Trade Rumor” to see what I mean. Some folks seem to think they can get the Sabres’ captain for a package of draft picks, prospects, and cast-offs.

Eichel is a great player on a bad team. He’d be even greater on a good one. And no, your favorite club won’t be able to take advantage of the Sabres’ dysfunctional front office to steal away their captain. Unless Eichel forces the issue, and there’s no indication he’s going to anytime soon, they have no intention of trading their franchise player.

NBC SPORTS WASHINGTON: JJ Regan examines what a flat cap of $81.5 million means for the Washington Capitals over the next two seasons. They have 11 forwards, four defensemen, and one goalie under contract for 2020-21, with a little less than $10.4 million in cap space remaining.

“Does this ensure the end of Holtby’s time in Washington? Does the team wait on a long-term extension for Ovechkin to get a better idea of where the salary cap may be in a few years? Can the team afford to keep any of its UFAs? Does the team leave (TJ) Oshie exposed to Seattle in the expansion draft?”

SPECTOR’S NOTE: Holtby was expected to depart via free agency even when the salary cap was projected to rise to between $84-$88 million. Gudas and Kovalchuk aren’t expected back. Re-signing Dillon could eat up between $4-$5 million annually. That won’t leave much to fill out the rest of the roster.

They could wait on an extension for Ovechkin until they see how things look beyond next season. Cap Friendly indicates they’ve got over $57 million invested in 13 players, with Jakub Vrana and Ilya Samsonov also to re-sign. They could be forced to leave Oshie or another comparable salary exposed in next year’s expansion draft to free up sufficient space for Ovechkin, Vrana, and Samsonov.

← NHL Morning Coffee Headlines - July 10, 2020 NHL Morning Coffee Headlines - July 11, 2020 →
We use cookies on our website to give you the most relevant experience by remembering your preferences and repeat visits. By clicking “Accept”, you consent to the use of ALL the cookies.
Do not sell my personal information.
Cookie SettingsAccept
Manage consent