​Could the Canucks trade Brock Boeser? What’s the latest on the Devils? Check out the latest in today’s NHL rumor mill. 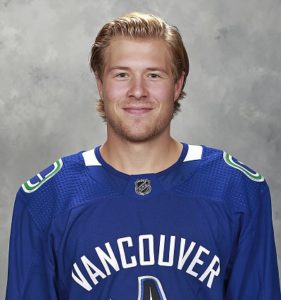 Could the Vancouver Canucks consider trading Brock Boeser in the off-season? (Photo via NHL Images)

Sekeres added he’s not saying Boeser is being shopped or is on the trade block. Rather, they’re looking at how they’re going to fit everyone within their payroll and Boeser’s $6 million cap hit was one of the things that came up.

THE ATHLETIC’s Thomas Drance believes there are better ways to navigate the cap than jettisoning Boeser’s contract and the Canucks know this. If there’s a Boeser trade after this season, it’ll be motivated by potential return than dumping salary. Drance thinks the Canucks have come to rate Tyler Toffoli more highly.

SPECTOR’S NOTE: Interesting speculation heading into the Phase 3 training camp. It could dog Boeser and the Canucks during the playoff tournament.

I agree with Drance that there are better options to free up cap space. Management could be just mulling over all their options at this point.

A solid return for Boeser, however, could prove tempting, especially if they’re trying to keep Toffoli off the UFA market while looking to shore up depth elsewhere in the roster. They could set an expensive asking price,  perhaps a first-round pick and a good young defenseman.

NJ.COM: Randy Miller reports New Jersey Devils co-owner David Blitzer suggested his club could be among those that benefit from a flat salary cap for next season. The Devils have over $26 million in cap space.

Miller wondered if the Devils could use their cap room to their advantage by signing premium free agents and/or shopping their high draft picks (two first-rounders and a second-rounder) to accelerate their rebuild. Blitzer didn’t seem to rule it that possibility but suggested they could wait until their young core players make some big steps forward in their development.

THE HOCKEY NEWS: In his post-mortem of the Devils season, Matt Larkin speculated they could use their cap space to target a big-ticket free agent. He suggested Florida Panthers winger Mike Hoffman could be a good finisher to player alongside promising center Jack Hughes.

SPECTOR’S NOTE: The Devils are in a great position cap-wise to sign a significant free agent or target cap-strapped clubs looking to off-load salary after this season. Whether they go that route remains to be seen.

Ownership seemed to suggest that could take another year or two. With the cap likely to remain flat for 2021-22, they could wait until next summer when they’ve had a full season to evaluate their younger players under new coach Lindy Ruff.

I’m not saying they won’t take advantage of their situation to add a skilled veteran or two, but it might not be a blockbuster move.

← NHL Morning Coffee Headlines - July 11, 2020 NHL Morning Coffee Headlines - July 12, 2020 →
We use cookies on our website to give you the most relevant experience by remembering your preferences and repeat visits. By clicking “Accept”, you consent to the use of ALL the cookies.
Do not sell my personal information.
Cookie SettingsAccept
Manage consent