Check out the latest on the Canucks and Bruins in today’s NHL rumor mill.

A FLAT SALARY CAP WILL SQUEEZE THE CANUCKS 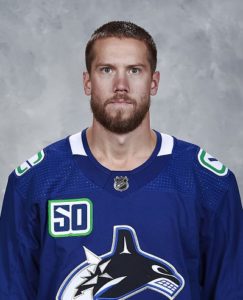 Unless general manager Jim Benning convinces veteran winger Loui Eriksson to terminate his contract, MacIntyre believes it could be impossible for the Canucks to retain their important players. He suggests at least two-thirds of their cap space could go toward re-signing Markstrom and Toffoli. They could get some cap relief if Micheal Ferland (concussion) starts next season on long-term injury reserve, but he’s in training camp attempting to come back.

The NHL’s financial landscape makes it almost impossible to trade contracts like Eriksson’s or Brandon Sutter’s, but Benning might find a taker for Jordie Benn’s $2 million cap hit. The Canucks could be forced to choose between Markstrom or Toffoli, letting Tanev depart via free agency, make Stecher a UFA by not qualifying his rights, or trading Virtanen. The nuclear option would be trading winger Brock Boeser ($5.875 million annual average value), but MacIntyre is skeptical about that move.

SPECTOR’S NOTE: The Athletic’s Thomas Drance recently suggested the Canucks attempt to re-sign Markstrom and Toffoli to matching $5.5 million AAVs and letting Tanev depart as a free agent. He acknowledged that would only leave over $6 million for the remainder.

It’s been suggested Benning attach a sweetener like a high draft pick or top prospect in a package deal to Eriksson once his signing bonus is paid out by mid-month to make him enticing in the trade market. That would leave only $5 million in actual salary over the remaining two years of his contract. Finding a club with the cap space to take on that cap hit was going to be difficult under normal circumstances. It will be more challenging now.

Boeser’s name surfaced over the weekend as one of the many options the Canucks were reportedly exploring. Just because Benning and his staff may have kicked that one around doesn’t mean they’re going to go that route. Trading Boeser is probably the last resort.

They could also buy out the final season of Sutter’s contract. Cap Friendly indicates that would provide them with over $2.33 million in savings for next season.

UPDATE ON THE BRUINS

Sweeney isn’t ruling out negotiating with his free agents during Phase 3 and Phase 4 of the return-to-play plan. However, he won’t be overly aggressive given the uncertainty over how player contracts will be affected going forward.

Haggerty points out the Bruins will see cap space opening over the next two seasons as David Krejci and Tuukka Rask become unrestricted free agents. For now, however, Sweeney could be forced to choose between Krug or DeBrusk.

SPECTOR’S NOTE: Haggerty also wonders if Krug might be willing to accept less on a short-term deal to stay in Boston and wait out the financial fallout for all pro sports over the next couple of years. It would provide the Bruins ($63.5 million invested in 18 players for ’20-’21) with some invaluable wiggle room. Krug hinted about accepting a hometown discount last fall. He might give it serious consideration if he doesn’t find offers to his liking in the UFA market.

← NHL Morning Coffee Headlines - July 13, 2020 Potential Problem Areas In The New NHL CBA →
We use cookies on our website to give you the most relevant experience by remembering your preferences and repeat visits. By clicking “Accept”, you consent to the use of ALL the cookies.
Do not sell my personal information.
Cookie SettingsAccept
Manage consent