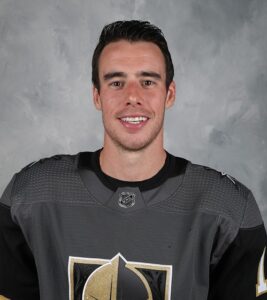 NHL.COM: The Vegas Golden Knights edged the Chicago Blackhawks 4-3 on Reilly Smith’s overtime goal in Game 2 of their first-round series, which Vegas now leads 2-0. It was goalie Robin Lehner’s seventh straight win in as many starts with the Golden Knights, who were without winger Max Pacioretty (unfit to play) in Game 2. His replacement, Tomas Nosek, left the game in the second period. Blackhawks winger Patrick Kane collected three assists.

Dougie Hamilton’s third-period goal lifted the Carolina Hurricanes to a 3-2 win over the Boston Bruins in Game 2 of their series, tying it at a game apiece. Hurricanes winger Andrei Svechnikov had a goal and an assist. Brad Marchand and David Krejci each had a goal and an assist for the Bruins, who were without winger David Pastrnak following an apparent leg injury suffered in Game 1.

Boston goalie Tuukka Rask, meanwhile, raised eyebrows with his post-game comments comparing the atmosphere in this playoff bubble to playing exhibition games. “To be honest with you, it really doesn’t feel like playoff hockey out there,” said Rask. “There are no fans, so it’s kind of like playing an exhibition game.”

SPECTOR’S NOTE: Rask probably isn’t the only player feeling that way, which could account in part for why some teams and notable players seem to struggle to regain their intensity in the early going. Those who adjust more quickly could have an advantage through the opening round.

Joonas Korpisalo made 36 savers backstopping the Columbus Blue Jackets over the Tampa Bay Lightning 3-2 in Game 2 of their first-round series, which now stands knotted at a game apiece. Oliver Bjorkstrand snapped a 1-1 tie in the second period, Alexander Wennberg put the game away with his third-period tally and Pierre-Luc Dubois picked up two assists. Nikita Kucherov scored for the Lightning.

SPECTOR’S NOTE: It’s the same story with the Blue Jackets. They get outshot by a big margin (37-22 in this game) but weather the storm and break your heart with their timely offense.

The Dallas Stars tied their series with the Calgary Flames at a game apiece as Jamie Oleksiak’s goal with 40 seconds remaining in regulation gave them a 5-4 victory. Stars blueliner Miro Heiskanen scored twice while teammates Alexander Radulov and Corey Perry each had a goal and an assist. Ben Bishop returned to the Stars net after being unfit to play in Game 1 while Taylor Fedun filled in for the sidelined Stephen Johns. Flames winger Matthew Tkachuk left the game following a third-period collision with Oleksiak and Jamie Benn.

NBC SPORTS WASHINGTON: Capitals center Nicklas Backstrom is in concussion protocol and won’t take part in Game 2 against the New York Islanders later today. Backstrom was injured following a late hit by Islanders’ captain Anders Lee. Lars Eller will replace Backstrom after returning to the club following the birth of his son.

AZCENTRAL.COM: The Arizona Coyotes hope to have center Nick Schmaltz in the lineup for Game 2 against the Colorado Avalanche later today. He’s been absent since being injured during an exhibition game two weeks ago.

SPECTOR’S NOTE: The low-scoring Coyotes could use Schmaltz’s offense against the Avs. He was their leading scorer during the regular season.

THE SCORE: Defenseman Dan Hamhuis announced his retirement after 16 NHL seasons with the Nashville Predators, Vancouver Canucks, and Dallas Stars. He played in 1,184 games, netting 356 points. Hamhuis played in two games of the 2011 Stanley Cup Final until a groin injury sidelined him for the rest of the series. He won a gold medal with Team Canada at the 2014 Winter Olympics.

SPECTOR’S NOTE: Best wishes to Hamhuis in his future endeavors. He was among the league’s best defensive blueliners during his playing prime.

← NHL Playoffs:: Resilient Blue Jackets even series with Lightning NHL Rumor Mill - August 14, 2020 →
We use cookies on our website to give you the most relevant experience by remembering your preferences and repeat visits. By clicking “Accept”, you consent to the use of ALL the cookies.
Do not sell my personal information.
Cookie SettingsAccept
Manage consent