​It’s been over a week since the Maple Leafs were eliminated from the postseason but speculation persists over their offseason plans. Check out the latest in today’s NHL rumor roundup.

SPORTSNET: Luke Fox reports Frederik Andersen could face an uncertain future with the Toronto Maple Leafs. He’ll become an unrestricted free agent next summer and his stats in elimination games aren’t that good. 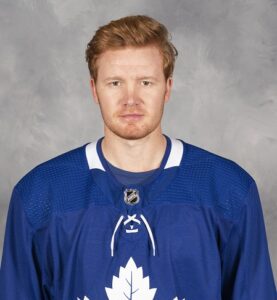 Fox notes the Minnesota Wild, New York Rangers, and Pittsburgh Penguins appear open for goalie trades, but he’s not sure what they have to offer would be an improvement over Andersen.

SPECTOR’S NOTE: With over $76 million invested in 17 players, the Leafs lack sufficient cap space to chase expensive UFA talent without shedding some salary first. I agree with Fox’s assessment of this year’s crop of free-agent goalies.

What might be available in the trade market isn’t that tantalizing. The Wild could shop an aging Devan Dubnyk or career backup Alex Stalock. The Rangers could peddle Henrik Lundqvist (provided he waives his no-movement clause) but he’s also past his best-before date. Alexandar Georgiev is another Rangers’ option but he hasn’t established himself as an NHL starter. Recent speculation tied Penguins starter Matt Murray to the Leafs, but he’s struggled with injuries and consistency since backstopping the Pens to back-to-back Stanley Cups in 2016 and 2017.

I anticipate the Leafs will stick with Andersen for next season and see how things unfold. It’ll give them time to assess next season’s trade market and see if there are better options among next year’s free agents.

TORONTO STAR: In a recent mailbag segment, Kevin McGran was asked about the possibility of the Leafs trading winger William Nylander. McGran feels Leafs general manager Kyle Dubas doesn’t want to go that route, but the coming salary-cap crunch could leave him little choice. He considers Nylander their most tradeable commodity.

SPECTOR’S NOTE: It’ll take some nifty salary-cap gymnastics for Dubas and his capologist to address his club’s need to bolster the defense without parting with a significant asset. Nylander could be the best option to land that elusive top-pairing, right-side rearguard.

TORONTO SUN: Steve Simmons reports the Penguins are looking to shore up their roster and have asked questions about Leafs winger Kaspari Kapanen.

SPECTOR’S NOTE: To which the answer should be, we’re not moving him unless you offer up a good, young, right-side defenseman or skilled two-way center.

“I take Cody Ceci’s $4.5 million — he’s a free agent — and add it with Tyson Barrie’s $2.5 million. Both should be leaving. Now you take $3 million from either Alex Kerfoot, Kasperi Kapanen or Andreas Johnsson and you’ve got $10 million to play with in a soft free-agent class, considering the economics of all of professional sport.”

SPECTOR’S NOTE: As per Cap Friendly, the Leafs have $76.9 million invested in 17 players next season, leaving roughly $4.5 million in cap space. That’s with Ceci and Barrie off the books. Dumping Kerfoot, Kapanen, or Johnsson would give the Leafs around $7.5 million to spend in the free-agent market.

Assuming Pietrangelo is willing to accept a modest pay bump from his current $6.5 million annual average value to come to Toronto (and honestly, why would he?), the Leafs would have no money left to re-sign other players (like Travis Dermott, Ilya Mikheyev, and perhaps Kyle Clifford) and fill out the rest of the roster.

← NHL Morning Coffee Headlines - August 17, 2020 NHL Playoffs: Flyers Edge Habs 1-0 To Regain Series Lead →
We use cookies on our website to give you the most relevant experience by remembering your preferences and repeat visits. By clicking “Accept”, you consent to the use of ALL the cookies.
Do not sell my personal information.
Cookie SettingsAccept
Manage consent