TSN: After a day of uncertainty, the Pittsburgh Penguins finally traded winger Patric Hornqvist to the Florida Panthers for defenseman Mike Matheson. The Panthers also sent winger Colton Sceviour to the Penguins in the deal. 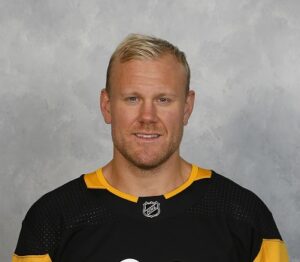 SPECTOR’ S NOTE: This trade was originally reported on Wednesday but was held up due to Hornqvist’s no-trade clause and insurance concerns regarding his contract. It took a day to get those issues sorted.

The Penguins get younger by taking on the 26-year-old Matheson and 31-year-old Sceviour while the Panthers hope to benefit in the short term by the 33-year-old Hornqvist’s playoff experience and gritty style of play. Matheson struggled over the last two years but the Pens have had success taking on blueliners (like Justin Schultz and Trevor Daley) who improved once they came to Pittsburgh.

Hornqvist has three years left on his contract, Matheson six years and Sceviour one year. The Penguins don’t free up much cap space for 2020-21, swapping Hornqvist’s $5.3 million annual average value for Matheson ($4.875 million) and Sceviour ($1.2 million).

The Penguins might not be done dealing. They have a surplus of eight defensemen under NHL contracts and still have to re-sign goaltender Matt Murray or Tristan Jarry. That’s generating speculation one of those blueliners could be shopped in a cost-cutting deal.

NBC SPORTS: Tampa Bay Lightning winger Nikita Kucherov’s consistency is among the driving factors in his club’s quest for the Stanley Cup. He’s the playoffs’ leading scorer with 30 points and has had eight multi-point games.

SPECTOR’S NOTE: Kucherov’s performance puts him among the leading candidates for the Conn Smythe Trophy as playoff MVP.

THE DALLAS MORNING NEWS: The Stars face the Lightning tonight in Game 4 of the Stanley Cup Final and Game 5 on Saturday. That could put a considerable burden upon goaltender Anton Khudobin. With Ben Bishop still unfit to play, there are questions over what they’ll do between the pipes during the upcoming back-to-back stretch.

SPECTOR’S NOTE: Khudobin normally backs up Bishop, but he’s played in most of the Stars’ games in this postseason. Youngster Jake Oettinger appeared in just over 36 minutes in two games, replacing Khudobin for the third period during the Stars 5-2 loss in Game 3 on Wednesday.

SPORTSNET: NHL commissioner Gary Bettman is understandably proud of what the NHL accomplished with its return-to-play plan with two quarantine bubbles in Edmonton and Toronto. “It’s been nothing short of remarkable”, he said yesterday.

Bettman praised NHL chief content officer Steve Mayer and his staff of 150 people for their planning and staging of the event, as well as the governments of Alberta and Ontario and the Canadian government, and the collaborative efforts between the league and the NHLPA.

SPECTOR’S NOTE: Bettman’s pride is justified. The league silenced its critics by staging a safe environment for 24 teams in two NHL cities to compete for the 2020 Stanley Cup. However, he indicated the league’s intent is not to stage next season in a bubble environment. They hope to have fans in the arenas when it is safe to do so.

WGR 550: The Buffalo Sabres signed center Curtis Lazar to a two-year contract extension worth an annual average value of $800K.

NHL.COM: The league revealed its offseason protocols for training at team facilities. The plan will be similar to Phase 2 of the NHL’s return-to-play plan.

The teams can open their training facilities if a minimum of five players request it commencing Oct. 15, though they can open them sooner at their discretion following the completion of the Stanley Cup Final. No more than 12 players will be allowed on the ice at one time, though more players may be present in the facility at the same time.

Local public health restrictions will be observed and mandatory testing for COVID-19 is required for players and training staff wishing to use the facility.

← NHL Offseason Lookahead - Boston Bruins NHL Rumor Mill - September 25, 2020 →
We use cookies on our website to give you the most relevant experience by remembering your preferences and repeat visits. By clicking “Accept”, you consent to the use of ALL the cookies.
Do not sell my personal information.
Cookie SettingsAccept
Manage consent