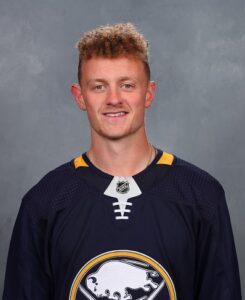 McKenzie also said several clubs have contacted Kevyn Adams since he took over as Sabres GM to inquire about Eichel’s availability. The Rangers were believed to be among those teams.

None of those talks discussions generated any trade traction involving the 23-year-old center. The Sabres aren’t shopping Eichel and there’s no real desire to trade their captain.

SPECTOR’S NOTE: You can’t fault general managers from calling to see if Eichel might be available. He has expressed frustration over the years of constant losing but his agent insists his client wants to make things work in Buffalo. The Sabres remain committed to building around their captain. Their recent acquisition of Eric Staal as their new second-line center is an obvious example.

NBC SPORTS BOSTON: Darren Hartwell reports of speculation the Bruins could trade the rights of Torey Krug. The 29-year-old defenseman is slated to become an unrestricted free agent on Oct. 9. The Colorado Avalanche, Florida Panthers, Vegas Golden Knights and Detroit Red Wings are said to be potential suitors for Krug’s contract rights.

SPECTOR’S NOTE: It seems unlikely the Bruins will re-sign Krug unless he’s willing to accept less than market value. TSN’s Frank Seravalli said hearing they offered a six-year deal worth $6.5 million annually but Krug apparently feels he get better offers on the open market. They could shop his rights before Oct. 9 if they can get a decent draft pick in return.

The Avalanche and Wings have the cap space to sign Krug. The Golden Knights have just $4.9 million available with goaltender Robin Lehner to re-sign or replace. The Panthers have $59.7 million invested in 12 players and there’s talk they could set an internal cap of $70 million. Neither club has the cap room at the moment to take on an expensive free agent like Krug.

Nick Goss, meanwhile, cited TSN’s Frank Seravalli suggesting Taylor Hall might be a good fit with the Bruins. The 28-year-old Arizona Coyotes left winger is also a pending UFA. Seravalli wondered what the Bruins will do with restricted free agent winger Jake DeBrusk, adding they won’t need to re-sign him if they pursue Hall.

SPECTOR’S NOTE: While Goss believes Hall would be a great fit alongside center David Krejci on the Bruins second line, his injury history and the cost of signing him (Goss suggests six years at $7 million per) makes him an expensive gamble. He also pointed the Bruins would still have to address the absence of Krug on their blueline.

THE SCORE: Sean O’Leary cited The Athletic’s Pierre LeBrun reporting sources claiming Philadelphia Flyers defenseman Shayne Gostisbehere is available in the offseason trade market. He has three seasons remaining on his contract worth an annual value of $4.25 million. An injury limited the 27-year-old blueliner to 42 games last season and he was also a frequent healthy scratch.

SPECTOR’S NOTE: Teams seeking a skilled puck-moving defenseman could take a chance on “Ghost Bear”. He’s got an affordable contract that could be appealing to cap-strapped clubs.

← NHL Morning Coffee Headlines - September 29, 2020 NHL Offseason Lookahead - Vancouver Canucks →
We use cookies on our website to give you the most relevant experience by remembering your preferences and repeat visits. By clicking “Accept”, you consent to the use of ALL the cookies.
Do not sell my personal information.
Cookie SettingsAccept
Manage consent