Senators owner Eugene Melnyk weighs in on next season, a suggestion for a 35-game schedule, how the Golden Knights roster has changed and more in today’s NHL morning coffee headlines.

OTTAWA SUN: Senators owner Eugene Melnyk is excited about his current roster, believing they’ll be competitive in 2020-21. While acknowledging there’s no guarantee next season will take place, he remains optimistic, noting the league is working hard to make it happen. He also indicated “there’s a lot of stuff that has to be done financially because everybody’s taking a big hit.” 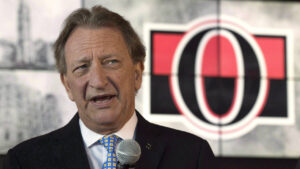 Melnyk half-jokingly said he’s not a fan of a proposed temporary Canadian division. “It’s only for a hockey reason. This is not our year. We’ll be competitive but this is the year the Canadian teams are all better. Every one of them – including mine. I’m still at the beginning of my rise up. Everybody else was good and they’re getting better.”

SPECTOR’S NOTE: The financial stuff Melnyk’s alluding to is the reports the league could ask the players to accept prorated salaries for ’20-’21 or deferring more of their salaries to a future date. The players have already agreed under the new CBA to receive 72 percent of their gross pay for the coming season. The PA is reportedly against proration.

Melnyk has a point about the difficulty the Senators would face in an all-Canadian division. They were better than the rebuilding Detroit Red Wings and finished just six points behind the Buffalo Sabres in the Atlantic Division last season. They’ll potentially be the weakest team in a Canadian division. The Sens wouldn’t be facing any of the other six clubs that failed to reach the playoffs last season or a Conference rival, such as the Florida Panthers, that may be weaker in the coming season.

BOSTON HOCKEY NOW: Jimmy Murphy cited NBC Sports hockey analyst Pierre McGuire recently suggesting 35 games might be the minimum for the NHL to complete the upcoming season. American Hockey League president and CEO Scott Howson agreed with McGuire. “Well, I think a 35-game season is better than no season in any league,” he said, pointing out the difficulties both leagues could endure in the face of COVID-19.

SPECTOR’S NOTE: All the speculation thus far suggests 48 games would be the minimum the NHL would accept. Nevertheless, we can’t rule out the possibility of a 35-game season. The course of the pandemic will ultimately be the deciding factor.

SPECTOR’S NOTE: Several of those players (Lehner, Pacioretty, Reaves, Stone) were in the final year of their contracts and due to become unrestricted free agents when they were acquired via trade and signed to extensions. With Cap Friendly indicating the Golden Knights carry limited cap space for the foreseeable future, they’ll probably look more toward building from within as the prospects they stockpiled develop into NHL-caliber players. They’ll also probably lose another from their “Golden Misfits” expansion draft class next summer with Nosek due to become a UFA.

THE SCORE: The NHL has completed its teasers of all 31 of their “Reverse Retro” third jerseys for 2020-21.

SPECTOR’S NOTE: I’m not a fan of the third jersey gimmick, but I can understand the push behind the current one. The NHL and its players need all the revenue it can get in 2020-21.

CHICAGO SUN-TIMES: Collin Delia is looking forward to challenging for the starting goaltender position with the Blackhawks.

← Sunday NHL Rumor Roundup - November 15, 2020 NHL Rumor Mill - November 16, 2020 →
We use cookies on our website to give you the most relevant experience by remembering your preferences and repeat visits. By clicking “Accept”, you consent to the use of ALL the cookies.
Do not sell my personal information.
Cookie SettingsAccept
Manage consent