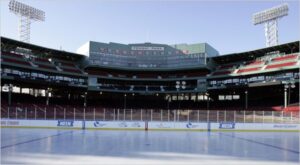 Could several NHL teams stage games in stadiums like Fenway Park this season?

None of the seven Canadian teams are believed considering that option because of public health restrictions across the country. Meanwhile, the Buffalo Sabres, Minnesota Wild, Tampa Bay Lightning, Washington Capitals, Philadelphia Flyers, New Jersey Devils, New York Rangers and New York Islanders are among the US-based teams that said no to the league for various reasons.

Appearing on TSN’s Insider Trading segment last night, LeBrun said the league hasn’t officially responded to the outdoor game possibility. The rationale behind outdoor games is it would some physically distanced fans into the stadiums thus generating some much-needed hockey-related revenue. Frank Seravalli believes the cost of COVID-19 testing for the teams involved to stage those games safely would also be a factor.

Friedman said the Kings pitched the idea to the Ducks, who were considering making this a joint venture. However, local health restrictions won’t allow the clubs to commit to the plan at this time. The Bruins, meanwhile, are looking at different options (including Fenway Park) while the Penguins have considered Heinz Park and PNC Park.

Significant hurdles, however, could impede this idea. It could cost millions to stage those games in outdoor venues. Approval would also be required by the players and opposing teams.

SPECTOR’S NOTE: Friedman pointed out NHL deputy commissioner Bill Daly last month suggesting outdoor games would be unlikely because of the associated costs. That would include those cited by LeBrun, Seravalli and Friedman. Health and safety protocols in each city provide an extra measure of difficulty, especially with COVID cases rising throughout most of North America.

I don’t expect to see any outdoor games because of the obstacle involved in holding those events. We currently don’t know if the 2020-21 season will be staged, let alone what the schedule will look like and what format it could take, but it probably won’t involve outdoor contests.

TSN: Rick Westhead reports two sources claimed the NHL Players Association is considering its options if the league cancels the 2020-21 season. Its’ lawyers are investigating whether to file an unfair labor practice complaint with the National Labor Relations Board in the United States (NLRB) or file a grievance with an arbitrator to ensure the players get paid. The PA declined to comment on how it would respond to a canceled season.

SPECTOR’S NOTE: This stems from the current uncertainty over the start of the season because of the impasse between the PA and the league over the latter’s recent request for higher escrow and deferred salary rates. While the union seems to be preparing for any possibility, this appears to be a precautionary measure rather than an indication the season is doomed.

PA Executive Director Donald Fehr and NHL commissioner Gary Bettman have resumed daily discussions. Players are returning to their NHL cities in anticipation of training camps starting up in the coming weeks. Carolina Hurricanes general manager Don Waddell yesterday said he expects a resolution in the next few days regarding the salary issues and the number of games this season.

Things could still go sideways. Talks between the league and PA could fall through, leading to a protracted labor squabble that drags throughout 2021. The course of the pandemic could make it impossible to stage a season of reasonable length. Nevertheless, most league and PA insiders believe the salary stalemate will be sorted out and a season will be held.

THE SCORE: The New York Rangers won’t release Alexis Lafreniere to play for Team Canada at the upcoming World Junior Championship. The New Jersey Devils also did the same with Jack Hughes, who played in the 2019 tournament.

SPECTOR’S NOTE: The two clubs prefer to have their promising youngsters ready for the NHL season whenever it begins.