​Check out the latest Max Pacioretty speculation and how the Capitals could find a short-term replacement for Henrik Lundqvist in today’s NHL rumor mill.

THE ATHLETIC: In a recent mailbag segment, Jesse Granger was asked about the recent trade rumors about Max Pacioretty. He doubts the Golden Knights will trade the winger, citing how much the Golden Knights gave up to the Montreal Canadiens two years ago to acquire him as one reason. 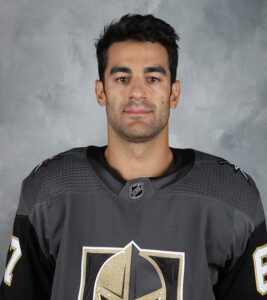 Granger cited sources indicating Vegas general manager Kelly McCrimmon called around the league to gauge interest in Pacioretty, goalie Marc-Andre Fleury and winger Jonathan Marchessault. However, those talks didn’t progress as McCrimmon was merely testing the waters to see what might be out there. Granger also dismissed the notion that Pacioretty requested a trade.

If the Golden Knights were to trade Pacioretty or Marchessault, Granger speculates they could attempt to bring back Erik Haula, who could welcome a return to the city where he had his best NHL season.

Granger also doesn’t believe the Boston Bruins would entertain parting with winger Jake DeBrusk in a package deal for Pacioretty. The 24-year-old DeBrusk is younger than the 32-year-old Pacioretty, carries a more affordable contract and is a restricted free agent when it expires in 2022.

SPECTOR’S NOTE: The Pacioretty trade chatter provided welcome grist to the NHL rumor mill. While anything’s possible, it seems unlikely he’ll be moved. In addition to the reasons listed by Granger, the Golden Knights are built to win right now. They have a better chance of winning the Stanley Cup with Pacioretty in the lineup this season.

I also agree with Granger’s take regarding Pacioretty to the Bruins. I don’t think they want to acquire a winger approaching his mid-thirties carrying a $7 million annual average value for the next three seasons. While they want to keep their championship window open for this season, they’re at the stage where they must also keep an eye on the future.

THE WASHINGTON POST: In her latest mailbag segment, Samantha Pell was asked if she expects the Capitals to make a trade before the season begins. She believes they could, citing a crowded blue line (“especially on the right side”) and the need to replace Henrik Lundqvist, who’s out for the season receiving treatment for a heart condition.

Pell suggested Nick Jensen as a possible trade candidate but could be retained in case another defenseman is injured.

THE SCORE: Brandon Maron listed several options for the Capitals to replace Lundqvist. One could be signing an unrestricted free agent such as Ryan Miller, Craig Anderson or Jimmy Howard. Another could be trading for a goalie, though he doesn’t see them taking on an expensive netminder such as Vegas’ Marc-Andre Fleury.

SPECTOR’S NOTE: The Capitals could surprise us by going the trade route. However, I concur with Maron that they’ll either sign a UFA or promote from within their system.

← NHL Morning Coffee Headlines - December 19, 2020 NHL Morning Coffee Headlines - December 20, 2020 →
We use cookies on our website to give you the most relevant experience by remembering your preferences and repeat visits. By clicking “Accept”, you consent to the use of ALL the cookies.
Do not sell my personal information.
Cookie SettingsAccept
Manage consent