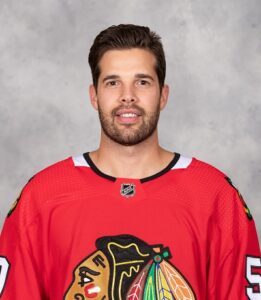 SPECTOR’S NOTE: Crawford had been absent for several days last week from the Devils training camp. On Friday, it was announced he was taking an indefinite leave of absence for personal reasons.

PuckPedia indicates Crawford is retiring rather than going on long-term injury reserve. Under the new memorandum of understanding to the collective bargaining agreement, his salary comes off the Devils’ books. Any multi-year plus-35 contracts where the compensation is the same or goes up with no signing bonuses after the first year no longer count against the salary cap upon retirement.

Best wishes to Crawford and his family in their future endeavors.

NEW YORK POST: The Islanders yesterday signed Mathew Barzal to a three-year, $21 million contract. The annual average value is $7 million, though in actual salary he’ll earn $4 million this season, $7 million next season and $10 million in 2022-23.

SPECTOR’S NOTE: The actual salary for the final season is notable because that’s what the Islanders must offer Barzal in 2023 to qualify his rights when he’ll be a restricted free agent with arbitration rights. He’s going to get a hefty raise on his next contract but that’s what it’ll take to keep their first-line center on Long Island.

**UPDATE** Under the terms of last year’s CBA extension (as per Cap Friendly), “The Qualifying Offer is limited to 120% of their previous contract’s annual average (AAV).” This applies to players on contracts signed after July 10, 2020.  In Barzal’s case, 120% of the AAV is $8.4 million, not $10 million. My thanks to “Howard” and “Caper” for pointing this out.

This signing leaves the Isles over the $81.5 million salary cap by nearly $3.1 million, but they’ll get cap relief by placing defenseman Johnny Boychuk ($6 million AAV) on LTIR to start the season. Nevertheless, the Isles could still be attempting to make a cost-cutting trade. I’ll have more in the Rumors section.

EDMONTON JOURNAL: Oilers’ winger James Neal has finally hit the ice in training camp after missing the first five days of practice in quarantine. For their season-opener, he’s expected to either be on the 23-man roster listed as unfit to play and on injured reserve or part of their six-man taxi squad.

The Calgary Flames yesterday indicated Sam Bennett was “unfit to participate” in practice. They also signed Brett Ritchie to a professional tryout offer.

THE DETROIT NEWS: The Red Wings claimed defenseman Christian Djoos off waivers from the Anaheim Ducks.

PITTSBURGH POST-GAZETTE: The Penguins canceled practice yesterday due to potential exposure to COVID-19 out of an abundance of caution. The club is expected to release a statement today regarding Sunday’s schedule. It’s unknown if any players, coaches or staff members tested positive.

NHL.COM: The Tampa Bay Lightning announced they will open their season without fans in attendance over concerns of rising COVID-19 cases in Hillsborough County and west-central Florida. The Lightning have permission to allow a limited number of fans inside Amelie Arena but have opted to wait until at least Feb. 5, when they’ll reassess the local situation.

The Western Hockey League (WHL) announced it will stage a 24-game regular season for 2020-21. The start date has yet to be determined. The WHL is among the feeder leagues for the National Hockey League.

← Dubois and Laine Dominate NHL Training Camp Rumor Mill Sunday NHL Rumor Roundup - January 10, 2021 →
We use cookies on our website to give you the most relevant experience by remembering your preferences and repeat visits. By clicking “Accept”, you consent to the use of ALL the cookies.
Do not sell my personal information.
Cookie SettingsAccept
Manage consent