​The latest on Pierre-Luc Dubois, the Devils’ options to replace Corey Crawford, and an update on the Islanders in the Sunday NHL rumor roundup.

NEW YORK POST: Larry Brooks believes the Rangers would have to pay a “painful cost” to acquire Pierre-Luc Dubois. The 22-year-old center reportedly seeks a trade despite recently signing a two-year contract with the Columbus Blue Jackets. 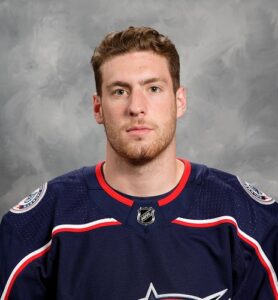 It would prove costly for the New York Rangers to acquire Pierre-Luc Dubois from the Columbus Blue Jackets (NHL Images).

Brooks said the Rangers are monitoring Dubois’ situation. He believes the Jackets will want a center in return, suggesting the Blueshirts might have to part with Filip Chytil as part of the return. He also thinks the Jackets would want Alexis Lafreniere or Kaapo Kakko in the deal. Brooks suggests K’Andre Miller, Matthew Robertson, Tony DeAngelo or Vitaly Kravtsov could also interest the Jackets.

SPECTOR’S NOTE: I think the Jackets would want a player who can improve their roster immediately. Maybe they’d be tempted to accept a package of young Rangers’ players/prospects if Lafreniere were part of the deal, but I don’t see the Blueshirts moving him or Kakko. Perhaps the Jackets would accept a package of young players and/or prospects if they could flip some of them to another club for an impact center.

SPECTOR’S NOTE: But Lamoriello isn’t Simmons and he’s not going to trade Barzal for Dubois. It would be a little risky for the Isles as we don’t know if Dubois would commit beyond next season to staying on Long Island.

For now, their tandem will be starter Mackenzie Blackwood with Scott Wedgewood as the backup. Masisak points out the external options aren’t ideal, with Jimmy Howard as the only goalie in the unrestricted free agent market who won a game in the NHL last season. Howard won just two of 27 appearances with a .882 save percentage with the Detroit Red Wings.

There were reports earlier in the offseason that the Vegas Golden Knights were looking to trade Marc-Andre Fleury but Masisak felt they had time to find a suitable backup by then. He wonders if the Arizona Coyotes might promote Adin Hill and listen to offers for Antti Raanta, who has a year left on his contract with a salary-cap hit of $4.25 million.

The waiver wire could be another option. The Toronto Maple Leafs placed Michael Hutchinson on waivers yesterday.

SPECTOR’S NOTE: The Devils could start the season with the Blackwood-Wedgewood tandem and see how things unfold. It’ll be interesting to see if they pluck someone off waivers. The fact no one signed Howard by now suggests he has little value to NHL clubs.

If the Devils opt for a trade they have plenty of salary-cap space to take on Raanta’s cap hit if the Coyotes want to move him. Fleury, meanwhile, isn’t available. The Golden Knights intend to start this season with Fleury and Robin Lehner splitting their goalie duties.

THE ATHLETIC: Arthur Staple reports Islanders GM Lou Lamoriello was trying to trade a player in order to sign Mathew Barzal to a long-term extension. However, it appears no team was willing to take on Thomas Hickey or Leo Komarov with budgets tight and the start of the season fast approaching. Barzal yesterday inked a three-year, $21 million contract with the Isles.

← NHL Morning Coffee Headlines - January 10, 2021 Crawford Retires, Barzal Re-Signs As NHL Regular Season Approaches →
We use cookies on our website to give you the most relevant experience by remembering your preferences and repeat visits. By clicking “Accept”, you consent to the use of ALL the cookies.
Do not sell my personal information.
Cookie SettingsAccept
Manage consent