​More Penguins speculation, two of the players involved in yesterday’s Hurricanes-Senators trade shouldn’t get too comfortable, and an update on Derek Stepan in the Sunday NHL Rumor Roundup.

THE ATHLETIC: Rob Rossi recently examined the big decisions facing the Pittsburgh Penguins following their hiring of Ron Hextall as general manager and Brian Burke as president of hockey operations.

Sources close to Sidney Crosby and Evgeni Malkin confirm both players endorsed the Burke-Hextall partnership. Team co-owner Mario Lemieux has long expressed to confidants and previous GMs that he wants both players to retire as Penguins.

Malkin’s contract expires at the end of next season. The Penguins can open contract extension talks this summer. Rossi noted Malkin stated in September 2019 his preference to signing a three-year extension to finish his career in Pittsburgh. He believes the Penguins will keep Malkin as that was the understanding when Burke and Hextall signed on. 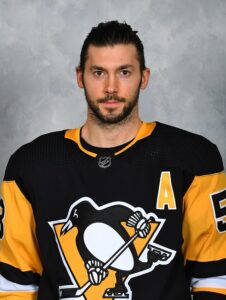 SPECTOR’S NOTE: Some pundits outside of Pittsburgh wondered about Malkin’s future (and Crosby’s) under the Penguins’ new management. It appears neither he nor Crosby will be going anywhere based on Rossi’s report. The situation could change but if ownership wants Malkin and Crosby to retire as Penguins then that’s what’s going to happen.

Kris Letang’s contract also expires at the end of next season. Rossi reports Lemieux is believed to prefer retaining the veteran defenseman. However, Burke and Hextall weren’t told Letang couldn’t be traded, only that any trade “must be done the right way for respect for all he’s done.”

Rossi also cited sources saying former GM Jim Rutherford placed calls to many teams to gauge interest in Letang. However, a deal to move him was never in place and wasn’t the reason behind Rutherford’s decision to step down. It remains to be seen if Letang wants to re-sign or what the Penguins might get in return if they trade him.

SPECTOR’S NOTE: Letang has a modified no-trade clause listing 18 preferred trade destinations. It’s difficult to say what his value could be but given his age (34) and UFA status next summer they might not find many takers in the trade market.

The logjam on the left side of the Penguins’ blueline could become Hextall’s priority to address before the Apr. 12 trade deadline. Rossi speculates either Mike Matheson or Juuso Riikola will have to go.

Parting with Matheson could require Hextall to package the blueliner with a draft pick, prospect or a player off the current roster. The Penguins cannot afford to carry an extra defenseman with Matheson’s contract ($4.875 million AAV through 2025-26).

SPECTOR’S NOTE: Matheson lacks no-trade protection this season but his modified no-trade (eight-team no-trade list) goes into effect next season. Moving him this season is preferable but his cap hit and poor play make him a tough sell.

COULD GALCHENYUK AND DZINGEL BE ON THE MOVE AGAIN?

SPORTSNET (via KUKLA’S KORNER): Chris Johnston reports anyone involved in yesterday’s trade between the Carolina Hurricanes and Ottawa Senator shouldn’t get too comfortable in their new locations.

Johnston doesn’t consider it out of the question that Alex Galchenyuk’s stay with the Hurricanes will be short given he’s bounced around a lot in recent years and could be on the move again in the near future. Meanwhile, the Senators have a decision to make with Ryan Dzingel. He’s in the final year of his contract and could be flipped for a draft pick at the Apr. 12 trade deadline if they decide not to keep him.

SPECTOR’S NOTE: Cedric Paquette was the centerpiece of that deal. The Hurricanes intend to keep him for the playoffs given his gritty style of play and postseason experience. Galchenyuk saw limited action with the Senators while Dzingel wasn’t playing up to expectations with the Hurricanes.

The Hurricanes could flip Galchenyuk to another club at some point before the trade deadline. Dzingel could also be moved if he fails to regain the scoring touch he had during his previous tenure with the Sens.

SPORTSNET: Wayne Scanlan reported Friday center Derek Stepan could be among the first Senators moved before the trade deadline. He’s among several players eligible for unrestricted free agent status this summer who could be useful pieces for a contending team.

Scanlan reported the team and the player seem to regret the trade that brought him to Ottawa. The veteran center is missing his family in Arizona but GM Pierre Dorion insisted Stepan hasn’t requested a trade. Nevertheless, Scanlan feels it’s clear Stepan is hoping the Senators can move him closer to home.

SPECTOR’S NOTE: A solid performance by Stepan in the coming weeks could improve his trade value. His annual average value is $6.5 million but he’s earning just $2 million in actual salary after being paid a $3 million signing bonus by the Arizona Coyotes before his acquisition by the Senators. Still, the Sens might have to pick up part of his AAV to make him attractive to cap-strapped contenders.

← NHL Morning Coffee Headlines - February 14, 2021 NHL Morning Coffee Headlines - February 15, 2021 →
We use cookies on our website to give you the most relevant experience by remembering your preferences and repeat visits. By clicking “Accept”, you consent to the use of ALL the cookies.
Do not sell my personal information.
Cookie SettingsAccept
Manage consent