​Analysis of the Canadian NHL teams before the trade deadline plus the latest on P.K. Subban, Conor Garland and Marcus Sorensen in the Sunday NHL Rumor Roundup.

LATEST ON THE CANADIAN NHL TEAMS

SPORTSNET: Elliotte Friedman reports the Vancouver Canucks have decided to hold off on becoming sellers now that they’ve climbed back into the Scotia North Division playoff race. They want to see how things play out and as a result has slowed things down in the trade market. The Columbus Blue Jackets are another club holding off after battling back into the postseason.

SPECTOR’S NOTE: Some observers aren’t buying into the Canucks’ recent improvement and believe they should remain sellers at the deadline. Still, management can’t be faulted for wanting to see if they can make a serious run for a postseason berth. If they falter over the next two weeks it won’t hurt their status as sellers, especially among other Canadian teams as none of their players would have to undergo quarantine if traded within Canada.

Chris Johnston believed it could be a quiet trade deadline for the Edmonton Oilers and Calgary Flames. GM Ken Holland may be reluctant to trade draft picks this year plus they have limited cap space. The Flames, meanwhile, would like to add some forward depth but may have made their big move by bringing back Darryl Sutter as head coach.

SPECTOR’S NOTE: If Holland does make a move it’ll likely be a dollar-in, dollar-out trade. Given that constraint, he could find it difficult bringing in a player who significantly improves the Oilers’ depth. The Flames, meanwhile, are reportedly seeking a right-shot right-winger. They might have to consider an affordable rental like Detroit’s Bobby Ryan.

Johnston considers the Winnipeg Jets the wild card among Canadian teams heading toward the trade deadline. They’ve already acquired Pierre-Luc Dubois and are looking for a defenseman but they must consider if they want to put that player through a 14-day quarantine as Dubois had to endure before joining their roster.

SPECTOR’S NOTE: Cheveldayoff hasn’t ruled out taking another swing in the trade market. The Jets have been linked to Nashville’s Mattias Ekholm and Columbus’ David Savard.

The Athletic’s Murat Ates believes Cheveldayoff won’t wait until deadline day to make his move because they’re using long-term injury reserve space on Bryan Little. That $2.8 million in cap relief doesn’t prorate and won’t increase as the season goes on.

Friedman believes the amount of interest in the Ottawa Senators’ pending UFAs will determine how busy they are at the deadline. While Montreal Canadiens GM Marc Bergevin has hinted he might not be busy in the trade market because of salary-cap constraints, Friedman points out he’s been unafraid to make big moves and not everyone is convinced he won’t do anything. 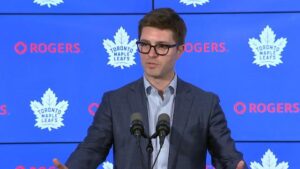 What will Toronto Maple Leafs GM Kyle Dubas do at the 2021 Trade Deadline? (NHL.com)

Friedman pointed out Bergevin has tradeable assets. He has 11 picks in rounds two through five of this year’s draft. Players like Tomas Tatar, Artturi Lehkonen, Paul Byron, Joel Armia and Victor Mete have surfaced in trade speculation. If Bergevin or his fellow Canadian GMs make a move for a player on an American club it’ll likely happen within the next 10 days. The 14-day quarantine means a player acquired at the April 12 deadline won’t be available until April 27.

While Toronto Maple Leafs GM Kyle Dubas is seeking a forward, Johnston doesn’t rule out the possibility he’ll acquire a defenseman. He acknowledged the Leafs have limited cap-space resources and he’s heard them linked to a couple of blueliners. Friedman notes there were questions if the Leafs will do anything in goal given how things are going with starter Frederik Andersen. However, he thinks they’ll stick with what they’ve got.

SPECTOR’S NOTE: It’s tricky enough for the Leafs to add a forward. It could get more complicated trying to also bring in a defenseman or a goaltender. Given their cap constraints, it appears they can only suitably address one need unless Dubas and his capologist have a trick or two up their sleeves.

As for goaltenders, rental options include Detroit’s Jonathan Bernier (currently sidelined), San Jose’s Devan Dubnyk and Arizona’s Antti Raanta. If Dubas feels the need to bring in a long-term replacement for Andersen (who’s a UFA this summer) I don’t see him addressing that need until the offseason.

NEW YORK POST: Larry Brooks points out P.K. Subban is having a pretty good season with the New Jersey Devils. Subban has a year remaining on his contract with a cap hit of $9 million. Brooks suggests he’d be a good option for clubs seeking a right-side defenseman if the Devils agreed to pick up half of his cap hit.

SPECTOR’S NOTE: That move could take place in the offseason if at all. Subban’s stock tumbled over the last couple of years. He’ll need another solid effort with the Devils to convince clubs he’d be worth pursuing. Besides, the Devils could be content to let him play out the final year of his contract and evaluate his value as a rental player next season.

SPORTSNET: Elliotte Friedman reports teams have shown an interest in Arizona Coyotes winger Conor Garland. He doesn’t believe it’s a move the Coyotes want to do but perhaps they’d consider it for the right price if it allows them to restock.

SPECTOR’S NOTE: On one hand, it makes no sense for the offensively anemic Coyotes to trade their leading scorer. On the other, we don’t know what first-year GM Bill Armstrong has in store for his club so we can’t dismiss trading Garland at the deadline unless Armstrong shoots it down.

← NHL Morning Coffee Headlines - March 21, 2021 NHL Morning Coffee Headlines - March 22, 2021 →
We use cookies on our website to give you the most relevant experience by remembering your preferences and repeat visits. By clicking “Accept”, you consent to the use of ALL the cookies.
Do not sell my personal information.
Cookie SettingsAccept
Manage consent